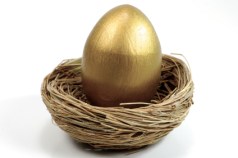 Twitter, the microblogging upstart, is close to raising as much as $100 million in new funding today, according to The Wall Street Journal.

The previously unreported new investor is T. Rowe Price. New York-based Insight Venture Partners is the other new player, as previously reported, while Spark Capital and Institutional Venture Partners will top up their previous investments. For comparison, this round is nearly double the $55 million Twitter has raised altogether so far.

Twitter is on track to have 25 million active monthly users, compared to Facebook’s 300 million, the newspaper reported.