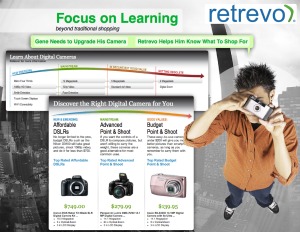 Watch out, Amazon.com: Someone’s trying to bump your shopping cart.

Consumer-electronics review site Retrevo today launched a marketplace that combines e-commerce and research for tech shopping. It’s aiming to simplify shopping for electronics — and muscle in on the $35 billion business of helping consumers decide what to buy and the most convenient way to buy it, cofounder Manish Rathi told VentureBeat.

Retrevo’s software, which it calls a recommendation engine, currently processes 100 million data points across 1 million products every day to provide users with a “Value Map,” or a way to look and compare products based on more than just price.

The company said it is aiming primarily at consumers that buy electronics via big-box retailers or e-commerce supersites. In other words, Retrevo’s main competitors are Best Buy, Walmart and Amazon.com.

Are these guys crazy?

Perhaps. But Retrevo claims the new service will use the same kind of technology that IBM used to power its Watson supercomputer to a resounding wins against human contestants in the Jeopardy quiz show to guide people to the right consumer electronics.

That sounds impressive, but from a more detailed description of the technology behind Retrevo given to EETimes, it’s not clear that Retrevo is doing anything more than using generic, commonplace artificial-intelligence technologies running on off-the-shelf servers with Intel processors.

However, it has tailored its AI for its own in-house needs over a five-year period via a team of engineers and algorithm refinement — though there is a case to be made that it is tarting up its marketing by associating itself with IBM’s Watson efforts.

Regardless, the company claims that using artificial intelligence makes its reviews more reliable and easily applicable to a specific user’s needs — versus the user reviews on Amazon.com whose accuracy and relevance are sometimes difficult to assess.

It’s hard to argue with Amazon.com’s results, however. By letting shoppers rate reviews on whether they found them useful to a purchasing decision, Amazon.com generates an additional $2.7 billion in revenue, a 2009 study found.

Retrevo’s e-commerce platform will feature a “Do Not Add To Cart” button on products that Retrevo’s A.I. deems “undesirable.” The button is intended to prevent buyer’s remorse and educate people about products that may better suit their needs.

Rathi said he is confident the company’s new offering will be a credible competitor because no one has the technology to help people decide what to buy, and do it at scale, reviewing virtually every product in the market, every day.

“As we enter into the e-commerce space with our marketplace, our goal is to ‘Sell’ without ‘Selling out,’ maintaining our unbiased recommendations, and only offering recommended products for sale,” said Rathi. “This is a bold move for a startup like Retrevo, but we are uniquely positioned to unite content and commerce to give our users a better shopping experience.”

One limitation to that experience: Retrevo is not stocking any items itself. Instead, it is referring shoppers to other retailers. To date, it has only signed up 10 relatively minor retailers like eForCity and SF Planet, and says it is talks with larger retailers like Target and J&R.

To date, Retrevo has received two rounds of funding, for a total of $12 million. Its last round consisted of $8 million raised in March of 2008.