Facebook remains an extremely popular destination site. But an increasing number of companies are trying to take elements of the popular social network and distribute them elsewhere on the web.

We’ve mentioned several, including most recently Deluux, which we called promising. Even Facebook is trying to extend itself elsewhere on the Web. Now there’s Ringside Networks, which allows Facebook applications to run (and stay synced) on any website.

The Marlton, NJ-based company launched in public testing mode earlier this week, and it was generating quite a bit of buzz at the just-completed InfoWorld Open Source Business Conference. With Ringside, companies can bring Facebook applications to their websites, and then add other social features like user profiles, comments, ratings and events. And because Ringside is open source, everything is completely customizable.

There are already plenty of other “white label” social networks, and even some, like Ning, that are also open source. Ringside’s approach is a little different. Rather than building a freestanding social network, it allows companies to integrate specific functions into their existing sites.

But what’s really exciting is Ringside’s ability to connect your site to Facebook, so that you can use Facebook apps to build a community at your site. For example,  founder Bob Bickel has already signed up Runlicious, an application for tracking your running and racing. Now Bickel’s running store can add the application to its website, and local customers can go to that site, not Facebook, to input and track their Runlicious stats. (The application can still draw information from their Facebook profiles, too; see diagram below.) Ringside also helps Runlicious developer Jonathan Otto reach a wider audience and make more money, since he plans to charge participating websites a subscription fee.

Facebook unveiled similar similar capabilities in January, but with Ringside, you can develop and deploy your application on Ringside’s server. Bickel said Ringside will soon be compatible with other networks too, including sites (like MySpace) that use Google’s OpenSocial platform.

Ringside was founded by Bickel, formerly the vice president of strategy and corporate development for JBoss. When I spoke to him at the OSBC (you can read his thoughts on the conference here), Bickel told me Ringside comes from a classic entrepreneurial instinct: He needed something done, couldn’t find a company serving that need and decided to build it himself.

Bickel said he was trying to build a website for his running store (hey, he wanted to take a break from tech) and couldn’t find a way to add customized social features, such as a page where people could share photos and times from their races. He tried to use existing products, such as Ning, but none of them meshed with his company site. Even though white label networks offer some customization, Bickel still complained, “Every Ning community looks the same.” That’s why adding features to your site, rather than building a fully-fledged network, is attractive.

Website owners and app developers can play with Ringside now, but unfortunately there aren’t any up-and-running sites to show off its capabilities. That should change in a week or so, Bickel said, and Ringside will link to the relevant sites.

The company has raised a seed round from Matrix Partners and is looking for another venture firm to partner with Matrix for a Series A. The company is also looking for a chief executive, with the hopes of establishing business operations on the west coast and allowing Bickel to scale back his involvement. 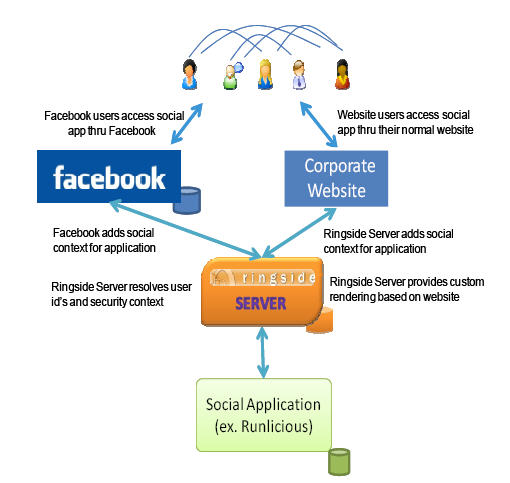