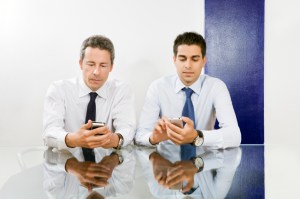 The old fashioned business-card exchange hasn’t kept up with the times. In an age of social networking, it ought to be easier to connect with someone electronically. That thought inspired Gabe Zichermann, chief executive of New York startup rmbr, to create rmbrME.

rmbrME lets you send out a bzCard, which includes a standard vCard data (phone number, address etc.) plus social networking links such as direct links to your Facebook or Linkedin pages. It works from most phones, including smart phones, and on any cell phone carrier. It’s a free service for now, but Zichermann says the company will introduce subscription versions and other monetization schemes later. 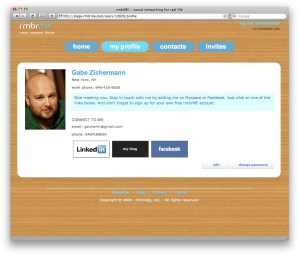 The service goes live today. The company has been testing it for a couple of months and has gotten good reviews, particularly from business users who want it to be integrated with other functions such as Salesforce.com for lead management.

The rmbrME service will also incorporate the concept of Funware, a term which Zichermann coined and an idea we highlighted in a popular feature story. The idea refers to introducing game-like concepts to motivate users of non-game applications. In this case, rmbrME will hold contests and have leader scoreboards for people who can exchange the most bzcards. Zichermann said he’s picked up a lot of interest from potential sponsors from trade shows. The thinking is that the organizers of the shows can hold contests where they give out awards to attendees who make the most of the show.

“The Funware part will make it easier to network with others in real life,” Zichermann said. “It’s obvious that people have a lot of social anxiety around meeting others, even though it’s almost always beneficial to do so. We’ll make it easier by turning it into a game.” 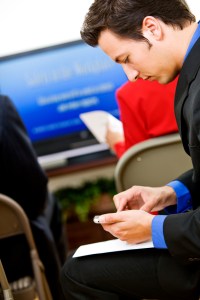 With rmbrME, you can register your business card at rmbr.com. Then you send a text message to 762763 with the mobile number or email of your exchange partner. That user receives a text message with a link on it that you can customize. The link takes the user to a rmbrME bz card. The user can then click to connect to you on social networking services such as Linkedin or Facebook. The user can also click to have your contact info inserted into the their contact directory on the phone. You don’t have to exchange paper at all.

Zichermann thinks the service will work particularly well for people who give speeches or meet a lot of contacts at trade shows. It bypasses the computer almost entirely (except for the initial contact set-up) and will help the industry move toward the idea of “real-time contact exchange,” which companies such as IBM have been exploring for years. Zichermann thinks it will work because it uses a lowest common denominator technology (most cell phones) and it is brand independent.

Earlier e-business cards failed because they required identical devices or deep knowledge of the way a particular phone worked. The original Palms worked only if you had two similar Palm devices.  In many cases, you can’t send a vCard from a Blackberry to an iPhone, even today. You can exchance data via a wireless Bluetooth radio connection; Bluetooth is present in most phones now, thanks to the popularity of Bluetooth head sets, but you have to go through the steps of turning on the Bluetooth function and authenticating it.

IBM’s Pensieve technology lets you take a constant photo record of your life and upload it to a “life feed” type experience. For example, it lets you photograph and upload each business card you get at a tradeshow, then parses it for information, and then makes it available for synchronization with your PC and devices. Of course, a CardScan business-card scanner is faster and more accurate at scanning in a card. But IBM’s technology is still in the lab.

Friend Book is a Tapulous’ application for the iPhone that lets you exchange contact information between devices if both of them are compatible iPhones, running the same software. All you do is put the two iphones together and shake ’em. As long as there aren’t too many people in the same room doing the same thing, your contact information is exchanged. The limitations: iPhone only, physical proximity needed, software download required, and risk of errors and damage.

Zichermann said that the company experimented with making the service work for every phone, but he found that certain technologies needed to be present to facilitate the exchange. That narrowed the universe of phones down to smart phones and certain other models. It will be interesting to watch if the service, or others like it that are sure to follow from the carriers themselves, can get rid of the business card.

“Business cards are like bank checks,” said Zichermann. “Who needs them? They served an important purpose at one time. Better than carrying wads of cash. But now they’re obsolete.”