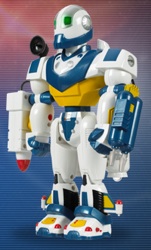 Robotgalaxy, a retailer that lets kids build toy robots, is developing a virtual world where players can take those robots on science fiction adventures. The New York-based company has raised a second funding round of more than $5 million to launch the game, as well as for other expansion.

Right now, Robotgalaxy operates two physical stores — one in a mall in New Jersey, one in New York — where kids can assemble a customized robot from many different parts. Once you’ve built a robot you can even program its movements. The average toy costs between $27 and $80, and they’re supposed to help teach kids about science and robotics — if the “battle axe flexor” and the “bazooka flexor” don’t seem like realistic accoutrements for a robot, well, give reality a little time to catch up.

The company says players will be able to bring their personalized robots into the virtual world, called Online Galaxy, then fight other robots and go on quests. Robotgalaxy also publishes a comic book featuring the robot characters.

Of course, bringing toys online isn’t exactly innovative — even Barbie dolls have their own virtual world. (Why was that the first one that came to my mind? I wish I knew.) And Robotgalaxy’s press release doesn’t offer any information about sales or traction. Still, I can imagine my 5-year-old self going crazy for the customizability.

The new investment comes from manufacturing partner Bachmann Industries and individual investors, according to VentureWire, at a $25 million post-money valuation. The company previously raised $7 million from the same backers.