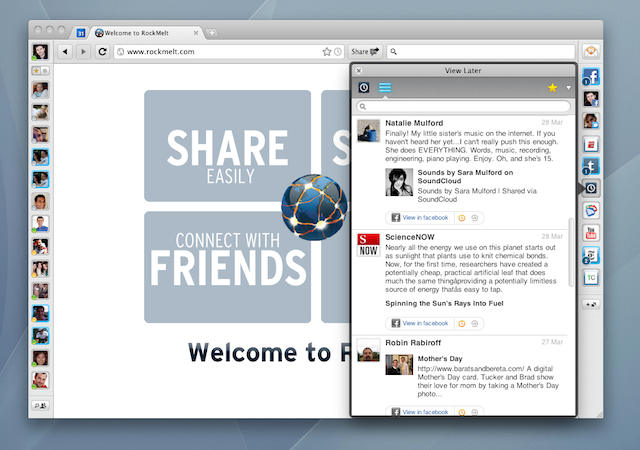 RockMelt, the Web browser that launched last fall with backing from Andreessen Horowitz, is releasing some improvements today that co-founder and chief executive Eric Vishria told me will tackle the two biggest requests from users.

Vishria and his co-founder Tim Howes have said their goal with RockMelt is to re-think the browser in a way that makes sense for a more social, interactive Web experience. Instead of having to constantly return to their favorite websites and social networks, RockMelt users can view their friends’ Facebook and Twitter updates, get notified about new content on their favorite websites, and start Facebook Chats with their friends — all through the browser itself.

The new version of the browser, RockMelt Beta 2, should improve this experience in a couple of key ways. It now includes a Facebook Chat Bar at the bottom of the browser, so that users can have tabs for multiple chats at once. At the same time, Vishria said some users are actually turning the chat feature off because they’re worried about getting bombarded by Facebook friends, so RockMelt now notifies you about a chat without opening a full chat window, making it easier to ignore messages if you’re busy or if they come from someone you don’t want to talk to.

The other big improvement is RockMelt’s Twitter support, which has added things like the ability to view all your “@ replies” on Twitter and take advantage of Twitter search. This makes it more likely that RockMelt users can address all their Twitter needs within the browser and less likely that they’ll have to visit the Twitter site itself.

The third major addition involves what Vishria said is a rethinking of bookmarks. Many people just don’t use bookmarks anymore, he said, but at the same time he saw something promising in apps like Instapaper, which let you bookmark content to read later. So in addition to traditional bookmarks, RockMelt now has a “view later” option, where you can add content that you want to read later without having to add it permanently to your bookmarks.

When RockMelt launched, the company got a lot of attention because of its ambitious vision and its backing from a venture firm whose partners included Netscape co-founder Marc Andreessen. But there was also plenty of skepticism, because it seemed other startups had attempted and failed to achieve similar goals. This week, Mountain View, Calif.-based RockMelt didn’t share its total user numbers, but it did reveal a few interesting promising facts about its users. On average, RockMelt users spend more than six hours per day in the browser and share content every two to three days. The average user has three chats per day on RockMelt. And 41 percent of RockMelt’s United States users are in high school or college.