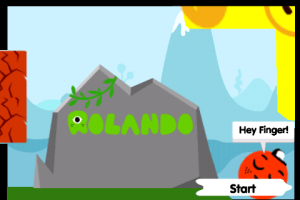 There have been a lot of good games released for the iPhone and iPod touch since the the App Store launched this past July. And now, with more experienced developers like EA, that have plenty of money to throw at game development, coming to the platform, they’re getting even better. Tonight, one company that’s had some success with an iPhone-only gaming approach, Ngmoco, rolled out its newest game — the first one it thinks enough of to price at $9.99: Rolando.

And I’m pleased to report that it’s worth it.

While early games like Enigmo (which, coincidentally is still the top-selling paid app thanks to price cuts), de Blob and DizzyBee showed the great promise of what the iPhone could do, Rolando fulfills that promise. I say that because it feels like an actual game rather than just a port or a technological demonstration. Some will say that’s because it’s almost exactly like Loco Roco, a game for Sony’s PSP system, but while it may look like that game, it’s the controls that really make Rolando stand out.

You control the various Rolandos on screen using a combination of the accelerometer, touch screen and multi-touch. Rolando integrates all of these together as well as any app I’ve seen so far on the iPhone, as I said when I previewed the game last month.

Sometimes you have to control multiple Rolandos at once, and it’s intuitive how to do it: By placing a finger on the screen and dragging over all the Rolandos you wish to control. To go back to just controlling one, you simply tap it. At some points, you also have to use your finger to manipulate other objects on the screen to complete tasks. But while there’s a lot to do and learn to play the game, it’s simple because it all just makes sense from a natural control perspective. 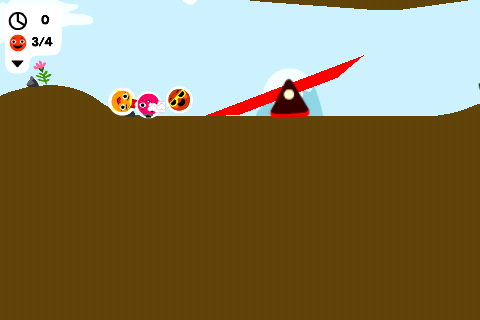 Though a relatively minor thing, it helps that the music in Rolando is good as well.

Also neat is the ability to quit the game, come back and pick up exactly where you left off. This is good in case you get a phone call or a text message that you have to respond to. Your position is saved in the game and if you have multiple Rolandos selected upon exit, it will even indicate that on the Rolando main iPhone screen icon, just as you see it indicated when you have a missed called or text message — with a little number in the corner of the icon.

I really like the recent Katamari, Lego Batman and SimCity games for the iPhone, but those lack something that Rolando has. I think that’s because none of those were built specifically for the iPhone. Sure, they were completely reworked for the device, but they were still originally made with other systems in mind. Rolando wasn’t — it was made for the iPhone and iPod touch, and it shows.

And you can’t beat the price. Even at $9.99, which is at the high end of the iPhone spectrum, a game like Rolando is so much cheaper than the cheapest games on systems like the Nintendo DS and PSP (which can go as high as $40). I have a feeling that a lot of people are going to pay the $10 for Rolando, and it will validate the “pay for quality” approach a lot of iPhone developers are starting to take in pricing their apps a bit higher.

The App Store may be getting cluttered with dozens of fart apps daily, but it’s apps like Rolando that give me hope for the future of the platform. I’ll stop short of calling it the best game on the iPhone so far, but only because I haven’t played it all the way through yet.