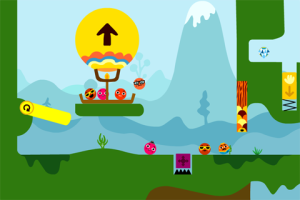 I’ve been excited about an iPhone game named Rolando ever since a video of it spread throughout the internet back in July right before the launch of the iPhone 3G (and App Store). The developers had hoped to release it in August, but that came and went, and the buzz largely subsided. But today I got a chance to play the basically completed version of the game — it’s even better than the original demo video — the buzz will be back soon.

The game, developed by Hand Circus and being released by one of the fast rising iPhone gaming powers Ngmoco, is now set to launch in December. But unlike Ngmoco’s other iPhone games, Topple and MazeFinger, both of which are hits so far, Rolando will be the first to move away from so-called “micro-pricing,” which is a fancy way of saying “cheap.” Topple is $0.99 and MazeFinger is free, but Rolando will be $9.99.

But in a world where we’re used to paying $20, $30 or even $40 for Nintendo DS or Playstation Portable games, $9.99 seems like a good deal for a game of this quality. Not only is the game a lot of fun and shows off perhaps the best combined use of multi-touch and accelerometer technology within any iPhone game yet, it’s also a pretty big game with four worlds and 36 total levels.

The game itself involves manipulating round characters named “Rolandos” around certain obstacles, fulfilling goals and doing so in a set time. There are regular Rolandos, which you move by tilting the device from side to side and make jump by swiping up on the screen; there are groups of Rolandos that you can control all at once by drawing a box around them and doing the same movements; and there are even characters like Spikey Rolandos, which can roll on walls.

Another great feature of the game is that you can quit it at any time (to do something like take a call or answer a text message) and it will automatically save your progress to jump right back in.

Rolando is kind of hard to describe, but it’s a lot of fun to play. Watch the video below for a better sense of it.