Google tests out a new, more functional iGoogle (with a friend update stream) — The company’s personalized homepage service is looking more and more like a — dare I say? — social network. The latest version has side tabs that can contain elements such as a Google Talk widget so you can instant message from the page and a Gmail widget so you can email from the page. Neither of these are new, but the layout of them is. 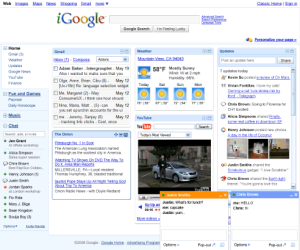 Most notable is the addition of an “Update” widget that looks like it will work exactly like Facebook’s News Feed, giving you updates of what your friends are doing around the Internet. In this regard it also seems a bit like the social content conversation site FriendFeed. (Which happens to be started by a bunch of ex-Googlers.)

Google appears to be making it so iGoogle is your main hub on the Internet. Facebook and MySpace along with the other social networks may have something to say about that.

Click on the image above for a slightly larger picture and notice the update stream on the right of that image.

Ahead of the iPhone 3G launch, Apple orders up more — The company’s stated goal for 2008 is to sell 10 million iPhones. However, with the excitement swirling around the iPhone 3G and its impending worldwide roll-out, most analysts are now projecting the number sold to be higher. Apple seems to agree, as it’s reportedly revised its build orders to more than 15 million iPhones by the end of the year, according to FBR Capital Markets analyst Craig Berger. Interestingly, the same report indicates that Apple ordered up two million of the original 2G iPhone as well. Maybe they’ll be stocking stuffers for the holidays?

Giant Interactive takes stake in Chinese social network 51.com — We noted last month that the site was closing in on $50 million or so in new funding, now we know the backer, thanks to Ogilvy China’s Digital Watch blog. Couldn’t they have made it $51 million just for kicks? 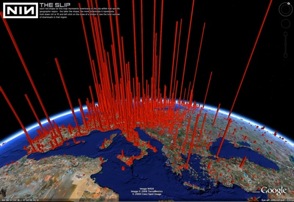 NIN continues to pioneer in the digital space — Rock band Nine Inch Nails has created an amazing layer for Google Earth that lets you see where exactly in the world people downloaded its latest work, The Slip, from.

The iPhone and iPod Touch: Your new remote control — You know that dinky white remote Apple gives away with many of its computers? Yeah, it’s about to get blown out of the water. A new application for the iPhone/iPod Touch will let you use either device to control iTunes remotely, according to MacRumors. Text indicating the feature is buried in the pre-release of the new iTunes 7.7, which is currently being seeded to developers to test.

BlogTalkRadio gets a $4.6 million first round — The social network lets users create their own radio stations on the web. The round was led by The Kraft Group, yes the same group that owns the NFL’s New England Patriots. Investor Scott Sipprelle also participated. The company is based in Lakewood, N.J.

We’re number one! (At predicting news…kind of.) — VentureBeat has risen to the top spot on the HubDub PunditWatch leaderboard, The Wall Street Journal’s Numbers Guy blog was kind enough to point out. The debate is still out as to what exactly constitutes a prediction, but we’ll take it and predict a long run at the top.