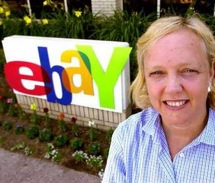 Meg Whitman, governor of California? — That’s the rumor following Whitman’s resignation from the boards of eBay, Procter & Gamble and Dreamworks SKG. Current Governor Arnold Schwarzenegger (yes, the Governator) will leave office in 2010, and term limits prevent him from seeking re-election. Whitman, the former chief executive of eBay, and, like Schwarzenegger, a Republican, has hinted that she may run. One potential rival in the primary could be Steve Poizner, the current state insurance commissioner and former founder of Silicon Valley-based SnapTrack — which sold to Qualcomm in 2000 for a billion dollars. CNET has more.

Sling Player Mobile for the iPhone unveiled — Another Macworld announcement has Sling Media, makers of the popular Slingbox, entering the iPhone App Store with an app to stream television content to the device. But unlike Joost, which does the same, Sling streams it from your DVR and allows you to manage your box remotely using the iPhone software, as CNET points out. The app will launch sometime in Q1 2009. The company also plans to use Macworld to show off Slingbox HD streaming for Mac computers.

Google launches Picasa for Mac — Macworld technically started today (though the keynote address is tomorrow and we’ll be covering it live), and Google took the opportunity to finally unveil a Mac-compatible version of its Picasa software. It manages your photos and easily syncs them with Google’s online portion of the service, Picasa Web Albums. The big question is: Will this get Mac users to switch from iPhoto? Probably not. If you use Picasa Web Albums this is nice, but it’s kind of ugly (reminds me of Firefox on the Mac — not the prettiest software), and will require you to move all your photos over. The Google Blog has more — or watch the video below.

Is Gmz the Twitter hacker? — TechCrunch thinks so after finding some posts on a hacker site called Digital Gangster. Their source says that Gmz obtained the login information for the various celebrities that had their Twitter accounts hacked and posted the information on the site.

Listen to 2008’s hot music for free with Music Blog Zeitgeist — A collection of the top songs, artists and albums from last year are all streaming for free on the new site from MP3 blog aggregator Hype Machine. It’s a nice layout and has some great music — all for free thanks to streaming provided by Imeem. ReadWriteWeb has all the details.

FileMaker Pro gets a new interface — The popular database software for the Mac (which also works with Windows) has launched version 10. The company says it’s the first new interface in ten years.

The plan is to build utility-scale solar power plants rather than cells for home use, according to CNET.

AT&T iPhone tethering also launching at Macworld? — We know it’s coming, but TUAW hears from a “trusted source” that it could come as soon as this week. It would cost an extra $30 a month to let you use your iPhone as the internet access point for a computer. There would be a 5GB limit on data usage — which is the same cap that you get with AT&T’s stand-alone high speed internet cards for $60 a month.