Microsoft and Icahn offered Yahoo $2.3 billion in annual revenue — That money would have been guaranteed from search advertising for five years. Yahoo rejected the deal yesterday. Its current search ad deal with Google guarantees them $800 million a year but is more open. More details on yesterday’s offer at AllThingsD. 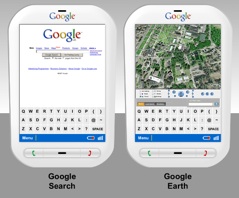 The Gphone continues to be a figment of our imagination — Despite rumors to the contrary over the weekend, Google still has no plans to makes its own cell phone. The remarks that sparked the discussion were simply misconstrued statements about Google’s Android mobile platform, according to Silicon Alley Insider. We’ve seperately contacted Google on the matter and got this in return:

“We hope the Android platform will spur the development of thousands of different kinds of phones. The form these phones will take will be determined by the handset manufacturers and network operators in the Open Handset Alliance and the global mobile industry at large. We’re excited about the possibilities this kind of open platform will engender, and the benefits that users will ultimately enjoy. We envision phones that will feature more engaging, easier-to-use interfaces and a rich portfolio of applications –- all of which will make it much easier to do more with the phone than just voice calls or simple messaging.”

That said, it’d be silly to entirely rule out the possibility that one day a Gphone could show up. After all, “thousands of different kinds of phones” is a lot.

And they were all yellow — As in the screens on the new iPhone 3Gs. Apple claims this slight tint is on purpose to improve warmth and contrast.

Is a Digg sale to the Guardian possible? — The increasing number of articles from the Guardian news site that end up on Digg’s frontpage has led CenterNetworks to speculate on this. While we’re speculating, I still think either Microsoft or Google will end up with the social news voting site. One could buy it just so the other one doesn’t in the little war for the Internet they have going on. Guardian just bought PaidContent last week. Digg, meanwhile has supposedly been looking to sell for a while.

iPhone app developers are nearing war — Due to silly moves by some of them to increase exposure for their apps, such as put a space or a number before their names so they will show up first in alphabetical lists, according to Macenstein.

Lawyer turned VC strikes out — Allen Morgan, who was a corporate attorney before becoming a venture capitalist with Mayfield Fund in 1999, has left the business, according to peHUB. The moral of the story may be: A good lawyer doesn’t necessarily make a good VC.

RockYou picks up two new Facebook applications — The largest developer on Facebook (based on number of installs), has scooped up Pieces of Flair and Speed Racing, according to Inside Facebook. No official word on pricing, but Inside Facebook thinks both could be among the most amount of money ever paid for a Facebook app.

More high profile angels go with Socialmedian — The social news service currently in stealth mode is raising something just shy of $1 million for its angel round. The Deal.com has more details.

Tired of being ripped off by iPhone text message rates? Bypass them. — I’ve gone on rants a few times now about just how big of a rip-off text messages are. Now, thanks to the new AOL Instant Messenger (AIM) app on the iPhone you can bypass them. TidBITS walks you through the process.