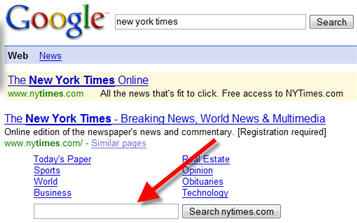 Google’s search-within-search bugs some publishers — Apparently some folks such as the Washington Post aren’t looking too kindly on a feature Google added earlier this month, which lets people search within publications like the Post directly from Google. The feature lets you search for a publication on Google, for instance the Post or other sites like Wikipedia, The New York Times, and Wal-Mart, and then gives you a secondary search bar to search within those sites. Here’s the rub: If you search the Washington Post from that bar for say, “jobs,” you’ll see results for the Post’s employment pages, but also ads nearby for competing job sites like CareerBuilder and Monster.com. The NYT has the story.

Modu, a company with a module that can be inserted into various wireless devices, raises $100 million — The Israeli company is expected to close the round within the “next few weeks,” according to the Globes, which also says the company is valued at a significant $150 million before the investment. The company has raised $20 million to date from Genesis Partners, Gemini Israel Funds, SanDisk and founder Dov Moran. The company is making modular hardware products built around its tiny module, a phone-MP3 device that can morph into different functions depending on the cellular device it is snapped into; there’s a video here (or just see below).

[youtube http://www.youtube.com/watch?v=8Fx4WUutlJY&hl=en]
Sun gets $44M contract from Pentagon’s DARPA to replace chip wires with laser beams –The wiring between processors on a chip is one of the biggest bottlenecks to increased efficiency in semiconductors. Sun has beat out Intel, IBM, MIT and HP on a government contract to figure out how to use silicon photonics, or light beams, to make chips faster and more efficient.

Will Fed make taxpayers pay more for Bear Stearns? — Shareholders of Bear Stearns, a third of which are Bear Stearns’ own employees, were so upset by the deal to bail out Bear Stearns at the low price of $2 per share that they’ve revolted and are pushing for a higher price of $10 per share. This is the bank that got caught up in the worst excesses of the subprime bubble, was apparently literally gambling while the ship sank and refused to participate in bailing out other companies (Long-Term Capital Management) in the past. So why would the Fed and JPMorgan want to make taxpayers pay the higher price to bail these guys out?

Search arbitrage company Geosign disintegrates after receiving record $160M investment last year — The Canadian company’s saga shows the danger of trying to use an arbitrage strategy with Google’s ads. It was buying Google keywords and sending people to landing pages with Yahoo ads on them. When Google found out about the trick, it changed its terms and shut off Geosign’s ability to conduct its arbitrage. The company’s business model disintegrated. American Capital, the lead investor in the company last year, is looking pretty foolish. Why make an investment in a company that isn’t producing anything of sustainable value? We reported on the company here last year when it raised the money.

The X Prize Foundation offers $10 million to team that produces vehicles that can get 100 miles per gallon or more — Details here. The winning cars must carry four or more passengers and have climate control, an audio system and 10 cubic feet of cargo space. Qualifiers also must have four or more wheels, reach 100 mph, and reach 60 mph in 12 seconds and have a range of 200 miles.

Battery companies LionCells and Seeo raise cash — Seeo, of Berkeley, Calif., has raised nearly $1 million in capital from Khosla Ventures, to make safe, high-density batteries. This comes after the company (which doesn’t have a web site) took in $1 million last year, according to a California regulatory document cited by VentureWire. Last month, another company, Menlo Park’s Lion Cells, which makes high-power lithium ion batteries, raised approximately $12 million, according to the SEC. Battery Ventures and Nth Power participated in the second round, according to the filing.

GotVoice, the speech-to-text company, now wants to raise money too — Perhaps jolted by the announcement last week that competitor SpinVox raised $100 million in a carrier land-grab for its own speech-to-text technology, GotVoice is now saying it too wants to raise financing. To give it more time, the Kirkland, Wash. company has raised a $1.78 million “bridge round” of funding to supplement the $3 million in raised in 2006 from Ignition and other individual investors, according to VentureWire.
Silicon Valley venture firm Morgenthaler Ventures raising funds — The venture capital firm is trying to raise another fund, totaling about $400 million, but VentureWire reports that the firm’s 2001 fund is below median in its performance and suggests investors are on the fence on the firm, founded in the 1960s.