Stanford Student Enterprises launches fund for its students — SSE, the business arm of the Stanford student government, already has $13 million in assets, but it wants a piece of the next hot company to come out of the university. The organization, which is financially independent of Stanford University, has created an investing arm aimed at startups founded by students, called SSE Ventures.

Members of Founders Fund and Charles River Ventures, along with early Google angel investor and Stanford computer science professor Rajeev Motwani have joined the SSE Venture’s advisory board. Funding will be between $50,000 and $100,000 and, and applications are due by April 27. The Stanford Daily has more.

Stanford, Calif.-based SSE already makes money from publishing Stanford’s phone book directory, running a campus store that sells Cardinal apparel, operating the student government’s bank, managing short and long term investments, and a range of other initiatives. It severed business ties with Stanford in 1996 and has seen a sharp uptick in revenue over the past several years, notably under the leadership of Justin Fishner-Wolfson, who now works at The Founders Fund. 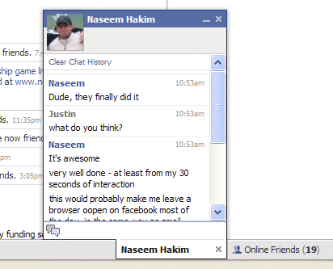 Facebook is starting to launch chat — The company has been working on a chat service that will be offered within its site, turning your Facebook friends into people you can chat with, as we’ve covered. The service is starting to be rolled out to certain networks now. Justin Smith at Inside Facebook has an early look.

Rumor: Online premium gift retailer RedEnvelope has laid off its entire staff — Valleywag reported the rumor on Thursday. We called and emailed the company but haven’t heard anything back. San Francisco-based RedEnvelope has a long history of drama, including a successful putsch by cofounder Scott Galloway against the powerful Sequoia capital three years ago (our coverage). Turns out, maybe, that Galloway hasn’t been able to save the company after all.

Gartner predicts open source domination in business software — “By 2012, more than 90 percent of enterprises will use open source in direct or embedded forms,” a Gartner report, The State of Open Source 2008, predicts. “Users who reject open source for technical, legal or business reasons might find themselves unintentionally using open source despite their opposition,” Gartner says.

Nintendo’s road to innovating on the Wii had a few twists and turns — The Wii has reshaped how people think about video games, because its console included controls that required users to actually move around while they play, as we’ve noted. But making movement-based video game controls is tricky, because the weight and size need to be just right to keep people from getting tired. For example, the company says it took more than 30 iterations to perfect the Wii Wheel, a steering-wheel control device for playing racing games.

Yahoo shares information about its upcoming ad sales system — The new system, called AMP, won’t be ready for a few months, but is said to greatly simplify the process of selling online advertisements, The New York Times reports. This new system could help Yahoo’s case against being taken over by Microsoft, however given the new 3 week ultimatum Microsoft delivered to Yahoo for a deal to get done (our coverage), it will likely be released too late to make an impact.