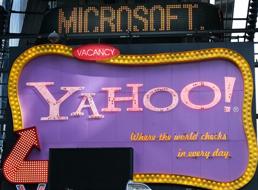 After a crazy 13 weeks, Yahoo hopes life will start to calm down — That’s the gist of this message to company employees from Yahoo chief executive Jerry Yang, after he and its board of directors rejected Microsoft’s purchase offer. Yahoo may get punished in the stock market today, but still, “I’m so proud of how this company has come together, put the noise aside, and showed the world that we have the resolve and determination to thrive in challenging times,” Yang says. Read our most recent coverage of the move, plus some more analysis. One clear winner this past weekend: Friendfeed, the so-called “life aggregation” service that lets you track blog posts, Twitter messages and other activities from your friends around the web. Frederic of The Last Podcast, Robert Scoble and many other bloggers used it to have freewheeling discussions with readers about the possible results of Yahoo’s rejection. [Photo via The Huffington Post.]

Grand Theft Auto IV on the hunt to break records — The release of violent, crime-oriented video game GTA IV last Tuesday is proving to be “the cultural, business and technological milestone” that VentureBeat’s resident video game expert Dean Takahashi and others predicted. While creator Rockstar Games hasn’t released official sales numbers yet for the United States, here’s some anecdotal evidence of its impact. The game is apparently driving a strong increase in sales of the two game consoles that it’s currently available for: Microsoft’s Xbox and Sony’s PlayStation 3. GTA IV also set a first-day video game sales record in the UK. It appears to have kept quite a few people home this weekend, hurting box office sales for newly released action movie Iron Man [Update: Actually, it appears that many people took a break from GTA IV to go watch Iron Man, which grossed $100 million this past weekend.]. And, inevitably, the extreme violence of the game is causing a backlash among people who find it offensive.
Related: Top game publishers drop out of their own trade association — Activision, Vivendi and other top publishers have been quitting the Entertainment Software Association, in part — it seems — out of displeasure with the ESA’s new president failing to respond appropriately to critics of games like GTA IV. Kotaku has the story.
Verbal war continues between Craigslist and eBay — Online marketplace eBay is suing online classifieds site Craigslist, which it partially owns, for allegedly attempting to water down eBay’s control of the company. In a post titled “Kettles and Pots,” Craigslist chief executive Jim Buckmaster responds that “eBay is suing us for implementing protections for Craigslist that it clearly believes are perfectly appropriate for protecting itself” — then dives into some messy eBay history.
Forbes release list of top-paid tech CEOs — And Oracle chief executive Larry Ellison is number one. More here.
This is what you call a serial entrepreneur — Gurbaksch Chahal, founder of Blue Lithium, the online ad company that sold to Yahoo for around $300 million last year, is back. He’s starting another company, according to a report in VentureWire, called gWallet. While it’s still in stealth (and closing a $10 million round), it apparently wants to be an online platform that helps shoppers find the best deals on the web.

Is this news? Many, many Facebook apps in the “just for fun” category — See graph put together by FlowingData, below. A number of pundits saw this graph and made the logical error of assuming that since most applications are pointless, they must be worthless. In fact, companies like Watercooler are making money from applications that tap into passionate fan bases of sports teams and TV shows. Also, the metric that should matter here, as one commenter on AllFacebook points out, is how many active users there are in each category. Still, as one Facebook application developer notes, it’s very hard for more complex, less “fun” applications to grow significantly large these days: “It’s not that users or application developers don’t want to use or build useful apps. It’s that Facebook’s current structure is heavily biased against them.” More on that here. 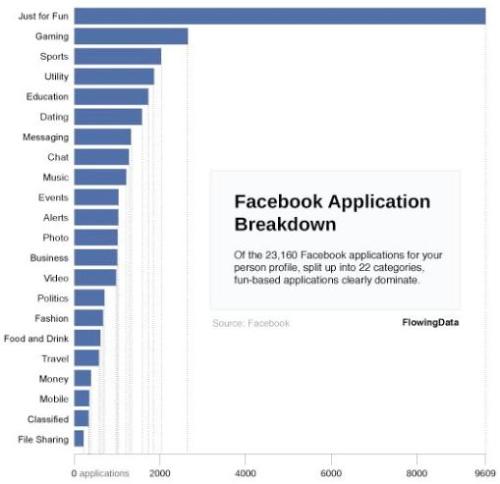