Royal Caribbean Cruises is turning its fleet of 37 cruise ships into high-tech playgrounds where technology is designed to help you enjoy your vacation. The company is showing off its concepts for the future at an event in New York on Wednesday evening. It’s all part of the evolution of technology, from smartphones to smart cruise ships.

The move is similar to announcements earlier this year by Carnival to roll out Ocean Medallion wearables on more than 100 cruise ships. Both companies say you’ll be able to use tech to unlock your staterooms and order drinks that can be delivered to you just about anywhere on the ship. And Royal Caribbean is creating an ecosystem for the technology to work in an integrated way with a concept it calls Sea Beyond. Ultimately, this is another example of how tech will blend into the landscape.

“We are putting innovation into everything we do, from shipbuilding to our culinary experience and our stateroom experience,” said Jay Schneider, senior vice president of Royal Caribbean Cruises, in an interview with VentureBeat.

At the Sea Beyond event at the Brooklyn Navy Yard, Royal Caribbean Cruises will show technology for its three main cruise brands: Royal Caribbean International, Celebrity Cruises, and Azamara Club Cruises. The cruise company started rolling out wearables for guests in 2015, and now it allows guests to access its digital services through their own devices as well. The Wow Band 2.0 will roll out over the next couple of years.

On top of that, the company will soon begin testing boarding through face recognition, Schneider said. The company wants to streamline check-in, boarding, baggage, wayfinding, and other tasks that get in the way of having fun.

“We think that is a pretty big leap forward, as it makes boarding the ship more efficient,” he said. “We are blending tech into the environment.”

The idea of getting a beverage to someone isn’t easy. The company first had to add Internet access to its ships over the past several years. The Wi-Fi routers are located in dedicated spots every few staterooms, Schneider said. That’s not easy, as the company’s biggest ship, Harmony of the Seas, can carry 6,700 passengers. Those Wi-Fi routers can be used to triangulate where a person is, based on the signals reaching a smartphone or wearable. The Wi-Fi network is connected to satellites, which enable access to the full Internet. 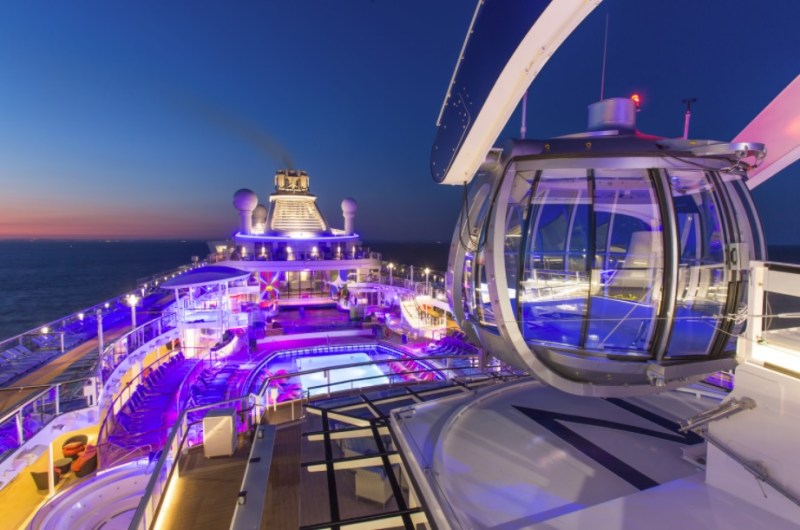 Above: Royal Caribbean is making its cruise ships into high-tech vacation spots.

“We’ve been investing in access points throughout our ships,” Schneider said.

In addition to the Wi-Fi networks, the company uses dead reckoning and other sensors to help locate you. This helps parents keep track of their kids, and it also allows the crew to bring drinks to you at the right spot at the pool or the deck. You can use your wearables or phones to unlock doors, and you can use your phone to change the temperature in your room.

Among Royal Caribbean’s partners are Ernst & Young, which helped with tech consulting and strategy. Overall, the company wants to be agnostic when it comes to technology brands.

Before the cruise, you’ll be able to check out the ships through virtual reality apps. That opens the door for virtual planning, where you can use the apps to plan your vacations and sample what it’s like to take an excursion. If you want, you’ll be able to check out the views you’ll see in a 3D, 360-degree experience that shows you what your day trip will be like. Perhaps the danger of this will be that you’ll take the VR vacation and decide, “Been there, done that.”

You can also interact with games, augmented reality experiences, and interactive signs throughout the ship. Guests will be able to order their meals or make reservations on their phones. Inside staterooms, you may not be lucky enough to have an ocean view. But Schneider said that guests can have “virtual balconies,” where screens make them feel like they’ve got that ocean view. Or your stateroom ceiling might show you an image of the stars above.

Another cool tech is “X-ray vision,” which is a kind of augmented reality experience. You can point your smartphone at a part of the ship, including parts where you can’t visit, and it will show you what is behind the walls. So you can safely check out places like the engine room or the bridge. 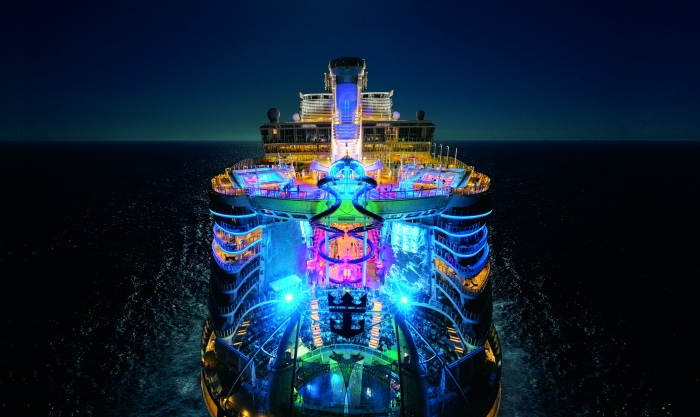 Image Credit: Royal Caribbean
On the crew side, Royal Caribbean is also putting more tech in the hands of its crew to make them more efficient, and to help the overall safety, management, and energy efficiency of the ship.

All this sounds futuristic. But Royal Caribbean will be rolling out all of the technologies across the fleet sooner than you might expect. About 15 percent of the fleet will be outfitted with new technologies by the end of this year, and it will be about 30 percent kitted out by the end of 2018.

You might wonder if people really want to have Internet access while they’re on a vacation cruise. But the vacationers have spoken.
“People want it, and they want it pervasively,” Schneider said. “They want it through the entire ship.”