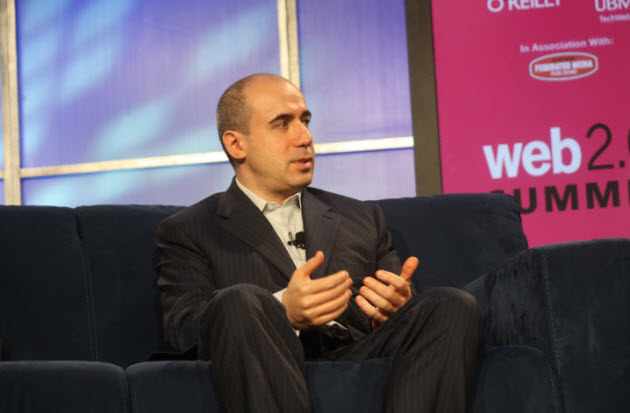 In years past, Silicon Valley companies were always in a rush to go public. But Yuri Milner, the founder of Russian investment firm DST, has found a niche in helping companies such as Facebook postpone their initial public offerings as long as possible.

DST has poured hundreds of millions of dollars into hot social companies Facebook, Zynga and Groupon. But it made those investments when the companies were in relatively late stages of maturity, just as they were poised to go public. Speaking at the Web 2.0 Summit on Tuesday in San Francisco with conference co-host John Battelle, Milner said that his company makes the investments to help fast-growing companies avoid “liquidity pressures.”

That is, DST can pour so much money into the companies that they don’t have to worry about raising money and can postpone their IPOs for a year or two. In doing this, DST works with the companies to buy 80 percent of the shares from secondary sources, such as employees or early investors who want to cash out, and only 20 percent from the primary share owners, Milner said.

That strategy involves a lot of risk, because it requires that DST come up with a ton of capital. But Milner has had no trouble with that. Earlier this year, he restructured the investment firm’s holdings so that its Russia-specific email, social and game businesses were all in one company, Mail.ru. That enabled Mail.ru, where Milner serves as chairman, to go public. Milner now runs the business of the global investment fund, DST, which is the entity that holds large stakes in Zynga, Facebook and Groupon.

The businesses all have potential for conflicts of interest. Zynga, the dominant player on Facebook, doesn’t always see eye to eye with the social network. Those dynamics make for the classic tensions between a platform owner and the platform’s major applications company, Milner said. But Milner avoids conflicts by refusing to take a seat on company boards, even though he has big stakes in each of the companies.

Milner’s role as chairman of Mail.ru also represents a potential conflict, since the Russian company is Facebook’s biggest rival in Russia. Milner said he is allowed “just one conflict” in this case and he presumably has to manage it closely.

Milner has become a very visible figure in Russian business. But he declined to comment on controversial matters such as the difficulty of dealing with corruption in the Russian government. He said that everyone must make an “individual decision” about what they will speak about. He has chosen to focus on running his business, he said.

Though Battelle tried to grill him, Milner wouldn’t disclose whether he had plans to invest in Twitter or any other fast-growing companies. There are about 20 or 30 large private companies that could be on his investment list, Milner said. Milner said he was focused on social and internet companies. Asked about social gaming, he said that all gaming will become social in the coming years. Asked about the Social Network movie, Milner said he liked it and the conclusion he drew from that is he believes that mathematicians will likely be the ones running the world.