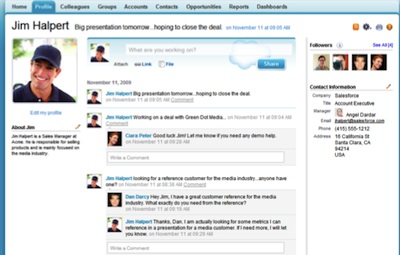 Salesforce.com announced today that it’s going to join the hordes of companies offering a social networking service for your business. With a new product called Salesforce Chatter, companies get their own secure, private social network where they can collaborate and communicate in real-time.

It’s a crowded market, with existing products from Jive Software, Socialtext, and many others, but Salesforce is one of the biggest companies to throw its hat in the ring. (Cisco recently announced social networking tools too.) Chief executive Marc Benioff will presumably make the announcement during his keynote speech at the company’s Dreamforce conference in San Francisco (which starting right now), but the news is already online. I’ll have more comments from Benioff soon, but in the meantime you can check out statements he made earlier this year about how real-time tools like Twitter are setting the example for business apps and infrastructure.

Chatter features will include:

Salesforce says it will release Chatter in 2010 and charge $50 per user per month.