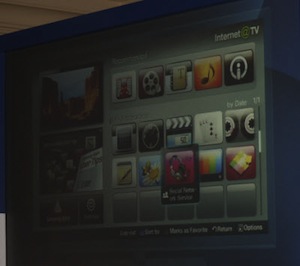 Electronics maker Samsung announced today that it’s getting into the app store game — but it’s thinking beyond the smartphone app stores that seem so hot right now. Instead, the company says you should be able to download an app that works across your phone, your television, and your Blu-Ray player.

So instead of searching for apps on your phone, you could scroll through Samsung Apps on your TV using your remote control, then choose a Twitter app, download it, and send a tweet from your television. Later on, you can access the same app from your Samsung phone. Or you could start watching an online streaming movie via Netflix on your TV, then pick up watching wherever you left off on your phone. Or you could leave your remote control out of the equation, and use your phone as your TV control.

Now, most of the announced launch apps — Netflix, Blockbuster, and Picasa — involve videos or photos, and I’m hard-pressed to think of many other apps I’d want to use on my TV. On the other hand, with moves like Microsoft adding Facebook to Xbox Live, this could be where things are going. Samsung says it has 25 percent of the cell phone market and 80 percent of the emerging LED TV market, so developers would have access to a big audience.

Samsung didn’t offer too many details about Samsung Apps, except to say it would start out with “dozens” of apps, and that it will be “open,” making it easy for developers to get their apps into the store. The company plans to launch the store in the spring, then add premium apps this summer.