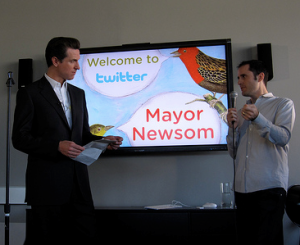 I’m not entirely sure what Twitter chief executive Evan Williams means when he tweets “We are twitterfying SF!” — should I be happy about that, or terrified?

Williams sent the tweet following a meeting with San Francisco’s mayor Gavin Newsom this morning at Twitter’s offices. The meeting, which was streamed live on the SFGTV website, apparently went well.

In a post this afternoon, Twitter co-founder Biz Stone writes that the company talked with the mayor about how it could better work with the city. That is pretty vague, but given Williams’ comment, one can probably assume that Twitter is going to be playing a major role in the way the city government communicates with the people. And that’s a good thing.

Of course, the most notable thing from Stone’s post is the revelation that the company promised the mayor it would keep its offices in San Francisco. I wasn’t aware of Twitter threatening to leave, but perhaps it was holding out for a better stadium — or at least new luxury boxes.

Update: Here’s the video of the meeting embedded below.