The sweetly named but oh-so-devastating storm that hit the mid-Atlantic with deadly force also shook up Twitter as people turned to the information network’s airways to share and search about Sandy.

People sent more than 20 million tweets about the storm between October 27 and November 1, Twitter said in a tweet today.

On Monday, October 29, search queries about Sandy peaked at 20 percent of all Twitter searches, the company added. In addition, Twitter mobile usage from people in New York hit max levels around 9 p.m. Eastern on Monday, around the same time as the ConEd explosion. The mobile usage represented more than double that of the previous two days. 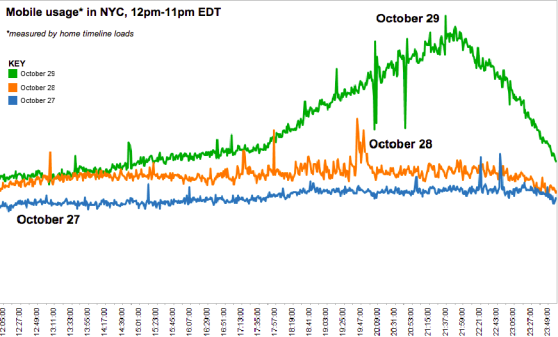 Twitter wasn’t the only social network with Sandy-related spikes in activity. On October 29, Instagram said members were sharing photos from the storm, using hashtags #hurricanesandy, #sandy, and #frankenstorm, at a rate of nearly 10 per second.

The storm also dominated conversations on Facebook. On October 29, Sandy registered an 8.34 on Facebook’s Talk Meter, a tool that measures event-related chatter on a 10-point scale. For comparison, only the Super Bowl had a higher Talk Meter score (8.62) than Sandy in terms of major of events for the year. By Tuesday, the top shared terms by people in the U.S. on Facebook were “we are ok,” “power,” and “damage.”