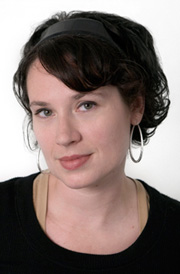 A while back, I finished reading Sarah Lacy’s book on Web 2.0’s rise in Silicon Valley, “Once You’re Lucky, Twice You’re Good.” I let my thoughts percolate on it until I saw the New York Times review of the book by tech journalist Katie Hafner. The NY Times reviewer was critical and Lacy herself feels like it was more like a review of herself than her book. Some of the criticism of the book is fair, some not.

Lacy herself has proven to be a lightening rod for personal attacks. Her cover story in 2006 of Digg and the Web 2.0 phenomenon, unfortunately headlined “How This Kid Made $60 Million In 18 Months,” was criticized because it was full of hype. She also brought the term “Twitter Mob” into fashion when she interviewed Mark Zuckerberg on stage at South by Southwest and ran into hostile remarks generated via live group Twitter posts. These events got so much attention that I can sympathize with Lacy’s view that people often criticize her, rather than her content.

By contrast, reviews of “Groundswell,” the Web 2.0 book by Charlene Li and Josh Bernoff, haven’t triggered nearly as much animosity. Both books were released about the same time in May. Interestingly, it is “Groundswell” that still has a decent ranking on BarnesandNoble.com, (2,586), while Lacy’s book has dropped in bestseller rankings to 37,724. (As an author myself, I admit to being overly obsessed with book rankings). I’ve met Lacy once, but really don’t know her personally.

Lacy’s book is not just a chronicle of the growth of usage for Facebook and the dollar signs in the eyes of the valley’s hottest stars who created the participatory web, commonly known as Web 2.0. It gets behind the curtains and peers into who these people are.

I thought its basic argument behind the book was good. I remember the “nuclear winter” of 2001 after the September 11 attacks and the gloom that pervaded Silicon Valley. There was only one group of people who were optimistic at that time, and, accurate or not, Lacy credits them for saving Silicon Valley and inspiring Web 2.0. Collectively, they were known as the PayPal mafia. It was the entrepreneurs such as Max Levchin and Peter Thiel. They were young Turks who got rich from PayPal’s IPO and subsequent sale to eBay. They were perhaps the last of a long line of lucky entrepreneurs who cashed in on the first Internet boom, just before the weak economy led a lot of people to write off technology investing.

While everyone else collectively backed off, Thiel and Levchin put their newfound wealth to work. They started new companies and invested in others, planting the seeds for an eventual spring for Silicon Valley. If it weren’t for such people, the valley might indeed have remained to afraid to try again. There is a certain amount of truth to this, and a certain amount of fiction. But Lacy captures the motivation behind these people well. Marc Andreessen, for instance, is motivated by his early association with Jim Clark, the only entrepreneur to found three billion-dollar start-ups in Silicon Valley. Andreessen, who cashed in big with Netscape and Opsware, is now working on the social networking platform company, Ning. That represents his attempt to prove wrong the naysayers who say he was just at the right place at the right time.

It might seem like the companies profiled in the book are randomly selected. But Andreessen and the other entrepreneurs highlighted share a common DNA: they want to become serial entrepreneurs because they’re addicted to the start-up life. It is what distinguishes the PayPal mafia and the others in the book who aren’t just sitting on the sidelines with their new economy riches.

It’s open for debate whether the personal details in the book about these entrepreneurs are really new or enlightening. Matt Marshall and Eric Eldon both know these details because they’ve paid attention to this space for a lot longer than I have. I am more distant from the day-to-day reporting of the social web, and so I have a more charitable view of the streamlined and anecdote-heavy stories that Lacy has put into the book. As such, I think general readers will find them interesting. These are the nuggets that I found the most interesting about the characters at the center of the social networking craze: 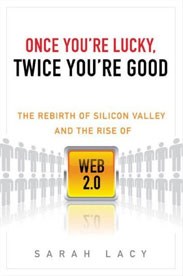 — Slide’s biggest competitive advantage over rival RockYou in the widget war: Max Levchin, co-founder of PayPal and CEO of Slide, has cheated death a few times. Doctors told his mother that the sickly boy wouldn’t live past three because of chronic bronchitis and chronic asthma. His mother saved him from drowning in the Black Sea at age 9. When his family fled Kiev, Ukraine, and the radioactive clouds of Chernobyl, Max had to leave behind a radioactive shoe. Nowadays, Levchin sleeps a couple of hours a night. Hence, the magazine cover: don’t bet against Max.

— Kevin Rose started Digg, the news story recommendation site, with his savings of $10,000. Rose hoped that one day he could pay his rent with the site. He split up with his girlfriend over the nutty idea. In past negotiations, Digg’s purchase price has been pegged at around $150 million, with Kevin’s share estimated at $60 million. In 2007, Marvel Comics released a comic book about Captain America. In a crowd of people, there’s a kid with shaggy hair and a Digg T-shirt. This story, part of the Business Week cover, got a lot of criticism because the story seemed to exaggerate the importance of Digg and the wealth of its founders.

— Evan Williams sold Blogger to Google. Then he left Google. Before starting Twitter, Evan Williams had a business called Odeo. It wasn’t working. He told the board he was shutting it down. But he didn’t just walk away from it. He proceeded to pay the investors their money back. Valleywag wrote, “Nice guys finish last.”

— Mark Zuckerberg’s sister Randi produced a cheeky music video with a reference to Facebook turning down Yahoo to go public. People interpreted the YouTube video as a sign that Zuckerberg’s company was about to go public. She had to pull the video down.

— Marc Andreessen’s favorite eatery is Hobee’s in Palo Alto. He eats there so much that two Hobee’s employees once fought over who could nominate him for customer of the year.

— In May 2007, at Facebook’s F8 conference in San Francisco, Zuckerberg took the stage in front of thousands. Then 23, he wasn’t used to big crowds and was continually wiping his sweaty palms on his jeans. He wore his signature flip-flops and his parents, sister and girlfriend were there to watch him. He stockpiled a bunch of the Adidas brand flip-flops because they discontinued the model.

— Jay Adelson of Digg attended Allen & Co.’s exclusive Sun Valley Media Conference in 2007. When Sumner Redstone, chairman of Viacom, approached, Adelson thought he was going to get an offer for his company. Instead, Redstone asked him what time it was. That was a come-down. But at the same event, Bill Gates told Adelson that he loved Digg. Digg also had negotiations with CurrentTV about an acquisition and Rose marveled at being on the opposite end of the table talking with CurrentTV chairman Al Gore, the Nobel prize winner.

— A peak inside the world of Peter Thiel, co-founder of PayPal and president of $3 billion hedge fund Clarium Capital Management: A Fourth of July party on the rooftop of his 4,000-square-foot San Francisco home, with a view of the Crissy Field fireworks. Valet parking and shuttles transport guests to the home, where they dine on four-star food from Ozumo Sushi amid a bunch of book shelves and chess boards.

— When Max Levchin proposed to his fiance, he gave her a 3.14 carat diamond ring. She responded, “Pi?”

Maybe you’ll like these details. Maybe they’re dull. But the best argument that Lacy can make about the importance of her book is that she was here, reporting in Silicon Valley, through the boom, the bust, and the recent recovery. As such, she has the perspective to understand and explain some of the currents that drive the cycles of innovation in a region that is once again, despite the rise of India and China, the center of worldwide attention. Lacy’s book has the perspective to explain the crazy events of our day, like why 1,100 people showed up on Friday night to attend the panel and party staged by TechCrunch.