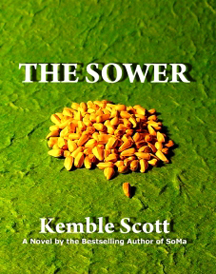 Scribd, a company that lets you share documents online, is starting to shake up the book market.

Author Kemble Scott’s previous novel SOMA was published traditionally and became a bestseller, but he decided that his new book, The Sower, included so many topical references that it might feel dated by the time it was published in 2010 or 2011. (That concern casts a rather dim view on the book’s chances for longevity as a work of literature, but I digress.) Instead, he decided to self-publish the book on Scribd’s website, selling it for $2 a copy and giving 20 percent of the revenue to Scribd, a much more favorable split than you’d find in the book industry.

However, The Sower’s success on Scribd attracted the attention of publisher Numina Press, which used print-on-demand technology to get the book into stores in just 29 days. And now, The Sower just hit the San Francisco Chronicle’s fiction bestseller list — perhaps that’s not too surprising, since the book was written-up in the Chronicle last month, but placing  just three spots behind the new book from Thomas Pynchon, one of the most respected novelists alive is simpressive.

When Scribd first announced its e-book store in May, it had already enlisted quite a few well-known authors, including Tamim Ansary and Tim O’Reilly, and it has since signed deals with more traditional publishers like Simon and Schuster. The San Francisco company can use this as further evidence that Scribd publication can lead to mainstream success.