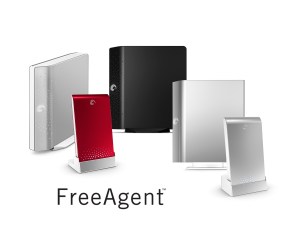 Seagate is elbowing its way further into the consumer tech market with new backup products that it will launch with a broad consumer-oriented ad campaign.

The devices, being introduced today, fall under Seagate’s FreeAgent brand. They range from portable storage drives to desktop backup drives for the PC or the Mac. They complement the more technical Maxtor brand of backup storage products and come in a variety of colors.

The marketing campaign will highlight the usefulness of backup technology in an age where everyone is becoming dependent on computers. TV ads will play to fears that a mother could lose all of the photos of her children if she stores her digital pictures on a computer without backup. It may sound like a political campaign ad, but I’m sure it works. I’d hate to lose all of my kid’s photos.

Seagate knows that only about 11 percent of us actually back up our data. There used to be barriers, such as technological know-how or higher storage costs. But those have melted away. And Seagate has an opportunity to score more sales by getting more people to use backup drives. As people collect more videos, music, and photos, the backup drives become critical.

The very fact that the ads exist at all suggests that backing up data — once thought an act performed only by hardware geeks — has entered the mainstream, said Brian Dexheimer, Seagate’s president of consumer solutions, in an interview. And Dexheimer views this as Seagate’s chance to become a household brand among non-geeks. As it does so, it will compete more and more with the likes of its customers, such as Dell and Hewlett-Packard, as Seagate CEO Bill Watkins has said in the past.

These drives aren’t hard to use. You just plug them into a computer via a universal serial bus (USB) port and the software starts automatically. You choose your options from a menu and you can schedule backups on a regular basis. After the initial setup, you can pretty much forget about it. Drive capacities range from 250 gigabytes to 1.5 terabytes of data. You can connect the drives through faster wires such as eSATA or Firewire 800, or Firewire 400. The brands include FreeAgent Go (starting at 500 GB) on the portable side, FreeAgent Go for Mac, FreeAgent Desk, FreeAgent Desk for Mac, and the high-end FreeAgent Extreme. Prices range from $119 to $349.