We all lose followers on the micro-messaging service Twitter from time to time. It happens to the best of us. Sometimes it’s because we go on 25 tweet (Twitter message) political rants in 5 minutes. Sometimes it’s because we had a bit too much to drink one weekend night and sent a stream of incoherent babble to thousands of people. Right now, un-following (requesting to stop getting someone’s updates) doesn’t alert the user you’re dropping that you’re leaving them. A new service, Qwitter, is stepping in to fill that void.

Let me just say that I don’t like this idea at all — but some people will. I really don’t want to hurt anyone’s feelings if I un-follow them, and the anonymity Twitter provides in that regard is nice. Qwitter strips that away and sends you an email when someone un-follows you. It even tells you the last tweet that may have led to the breakup.

Here’s a sample message you’ll get:

What’s the difference between Arial and Helvetica?

If you actually know the person, that should make for an awkward conversation. If you don’t, I expect there may be some creepy, stalker-ish emails sent because of this program.

Qwitter says it checks for un-follows on accounts that sign up on a regular basis, but will be slower the more followers you have.

Feel free to follow me on Twitter here, as well as the other VentureBeat writers Eric Eldon, Dean Takahashi, Anthony Ha, Chris Morrison, Dan Kaplan and our VentureBeat account — but don’t un-follow us, because we’ll know. 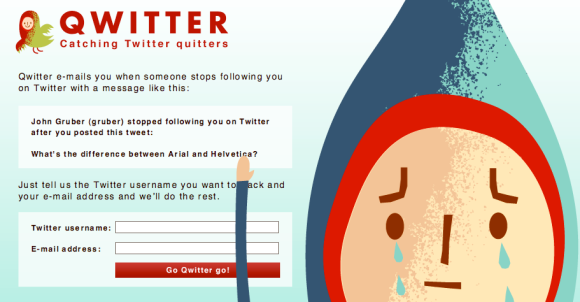