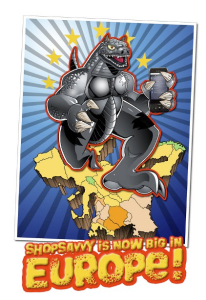 ShopSavvy is one of the most popular applications on Google’s Android mobile platform. It has over 400,000 users who actively use it on their G1 phones to scan barcodes and look up items online to comparison shop in real-time. And the new version, dubbed “Gigan,” launching today, should make the app even better.

The big new feature in this release is the addition of location-based functionality provided by Skyhook Wireless. While the app previously had location features, it accessed them through the G1’s GPS chip. This process took anywhere from 30 seconds to 2 minutes to work properly, says Alexander Muse, co-founder of Big In Japan (ShopSavvy’s developer). And because GPS is really meant to be used outdoors, it wasn’t that great at pinpointing your location even after the wait. Skyhook Wireless’ solution, which uses a hybrid model of GPS data plus Wi-Fi and cell tower triangulation, will work much better.

This is important for a few reasons. First, as a shopper, if you’re in a store looking up a product and notice it’s for sale somewhere else at a cheaper price, you’ll want to know where that other store is in relation to where you are at the moment. If the location data is off, ShopSavvy may not even realize that you’re near a store with a deal. Second, retailers want to offer special deals or coupons through ShopSavvy to customers, but it’s much better for everyone if they can do that when a customer is actually in the store. With good location data, this will be a reality.

That, in turn, will allow Big In Japan to make money from ShopSavvy. The app currently has affiliate deals with online shops, earning kickbacks when customers buy there, but the coupon angle is potentially more lucrative.

There are other, smaller features that come with this Gigan release of ShopSavvy as well. The most notable is the improvements made to the barcode scanning software. It works noticeably faster now, Muse tells me, and will also be more accurate.

These improvements came about during Big In Japan’s development of its iPhone version of ShopSavvy. That application isn’t available yet, but is at least being tested. By the time the next release rolls around — which should have an integrated payment option — Muse hopes the iPhone version will be ready to roll.

He says they are also looking at a Windows Mobile version, as well as one for the Palm Pre, when the device becomes available later this year.

This Gigan release for Android will also feature a “stealth” mode for scanning items in stores. Muse notes that while scanning items isn’t illegal, many users felt awkward given the loud beeping noise ShopSavvy makes during the process. That can now be turned off.

On the social front, you’ll now be able to send out alerts regarding your ShopSavvy use to Twitter, letting others know when you find good deals.

Big In Japan was one of the original winners of the Android Challenge back in September for ShopSavvy, which was then known as GoCart. That win brought the team $275,000, and led to a subsequent angel round of $700,000 from Architel LP, a network and IT company which Muse also owns.