Like it or not, selfies are a big deal.

They might be tiny bursts of pride for teen girls, as Slate argued. Or maybe they are a cry for help. Either way, people have been making selfies since 1523 — but the advent of smartphones with front-facing cameras have made them trendy enough that “selfie” was Oxford Dictionaries’ word of the year for 2013. Makati City in the Philippines is the selfiest city in the world, but New York isn’t far behind, with 202 selfie-takers per 100,000 people. But hey — every city has its own selfie style.

So I suppose it makes sense that Shots, an app designed exclusively for taking and sharing selfies, has reached one million downloads in the five months since it launched. That’s a significant milestone, even though an increasing number of free apps can boast the same reach.

More significantly, perhaps, the company reports that about 70 percent of its customers use the app at least once per month, which means that it should have about 700,000 monthly active users as of this month. The average user spends 20.53 minutes in the app per month, the company says.

“Our philosophy is if you make something positive and fun, it will grow,” Shots cofounder John Shahidi told me earlier this week during a demo. 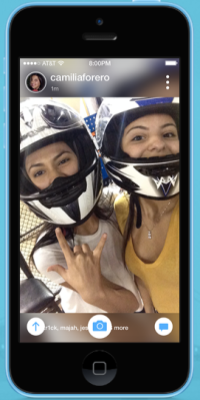 Above: The Shots app has a simple interface for taking and sharing selfies.

Positivity, for Shots, means a design that encourages sharing without the bullying and nastiness that often accompanies social sharing. Shots photos have no comments, and the service doesn’t post follower counts, so you can’t compete with your classmates to see who has the most followers. The company also provides tools for blocking people who annoy you, and it will delete the accounts and permanently ban the device IDs of those it catches violating its policies — such as by posting nude selfies.

You can’t grab photos with the app from your photo library, the way you can with Instagram or others: You can only use the front-facing camera in real time. It has no photo filters, and the only concession to photo tweakers is that you can adjust the exposure by holding your finger against the part of the image you want it to focus on.

I brought my 13-year-old social media research assistant to the demo, because Shots is aimed at that demographic. Selfies, of course, are hugely popular among teenagers, especially girls, and Shots boasts that 78 percent of its users are 13- to 24-year-old females, a highly desirable demographic.

Celebrity endorsements help, too: Teen idol Justin Bieber is an investor and a user of Shots, and during the demo, Shahidi quickly called up Bieber on FaceTime to see if he could chat with the 13 year old. (Bieber was busy in the studio, but he later followed her account on Shots, lending her instant cred among her middle school peers.)

The 13 year old seemed to like the app and appreciated its anti-bullying measures. I’m kind of having fun with it, too. I think I’ve taken more selfies in the past two days than I’ve ever taken in my life.

Shots is also adding a few new features today. Most significant, people can now reply to a shot by embedding their own selfie as a sort of visual reply. This reply-by-photo feature is a bit of a change to the “no comments” policy, because you can add text to any selfies you take in Shots. That means you can post a comment on someone’s selfie by using the “Reply Shot” feature — but since that comment comes with a picture of your own face, I’m guessing that will hold down on the more obnoxious bullying behavior seen on other sites. On the other hand, there’s nothing stopping people from using the front-facing camera to take pictures of something other than their faces.

Shots is also adding some new local-language versions (40 percent of its users are in the non-English-speaking world, so that will be a welcome addition) and a new “timeline search” feature.

Shots has taken $2.6 million in seed funding to date, in two separate rounds last year. Investors include Bieber, boxing legend Floyd Mayweather, angel investor Shervin Pishevar, and others. The company is working on a convertible note leading to its next round. It employs six people and is based in San Francisco.