One the most important parts of online mapping tools is the satellite imagery that is used. Right now, the images used by Google, Microsoft and Yahoo in rival products are all roughly the same. But Google just bought an exclusive ticket to hitch a ride with a new satellite going up that could make its offering a lot better.

Google has signed a deal with satellite imagery company GeoEye for exclusive use of the images produced by the company’s new GeoEye-1 satellite, according to Reuters. The satellite will reside 423 miles above the Earth and will be able to produce imagery that is so sharp, Google will have to tone it down to put it on the web.

The GeoEye-1 will be able to get details with a resolution of 41 centimeters, but current licenses with the U.S. government will limit usage to 50 cm or worse. Most commercial imagery satellites have a resolution of 60 cm, a Google spokesperson tells CNET.

Google is unlikely to use images that sharp anyway as 41 cm is the resolution for black and white images only, color images have a maximum resolution of 1.65 meters.

Google currently uses satellite imagery from GeoEye rival DigitalGlobe. Others, including Microsoft, use it as well. The new GeoEye imagery will be used in both the Google Maps and Google Earth products.

Thanks to the exclusive deal, Google also gets to place a logo on the rocket which will carry the GeoEye-1 into orbit. You can watch the countdown to launch on the site. It will blast off in almost exactly six days and it will be streamed live.

Below is a sample image of what 1 meter versus 50 cm resolution imagery would look like. If there was a game going on, you could almost watch a play at the plate in 50 cm resolution. 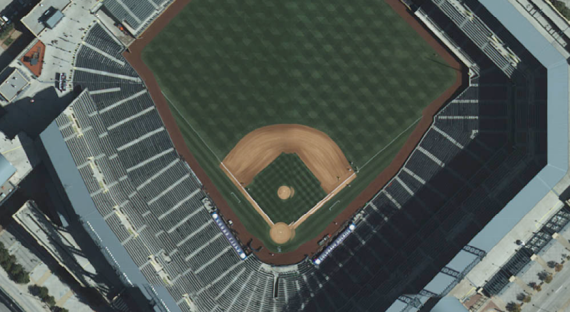