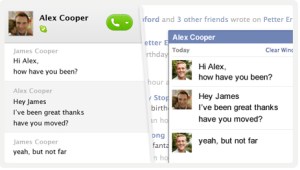 Skype has traditionally allowed its Mac client to lag behind the Windows version in both design and feature additions. Yet, the latest update brings the Mac up to speed.

The only thing you can’t do at this point with the new integration is conduct video chats with your Facebook friends. However, I expect this will change soon, since Facebook announced in July that it would use Skype-powered video chat on its own site.

The new Mac OS X client update also includes display advertising within the main Skype window, which the Windows version has had for quite a while now. If you don’t want to deal with the ads (or if you’re already a subscriber), you can sign up for a Skype service plan to remove them.