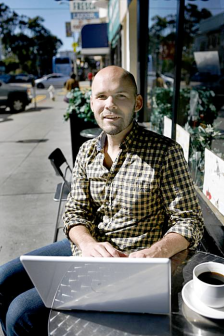 He was recruited by a former colleague, Chloe Sladden, who experimented with one of the earliest uses of Twitter against a live broadcast. During the first presidential debate of the 2008 campaign, Sloan built an application that would overlay curated tweets over the bottom of the screen (see the video below).

He didn’t give any specifics as to how he sees Twitter working with media organizations. Instead, he pointed to how quickly the company’s ecosystem has evolved.

He wrote on his blog:

“I feel like I’m constantly learning and re-​​learning how to use Twitter. And I think that’s because, paired with this odd constraint, you’ve got this crazy openness—this refusal to specify exactly what you’re supposed to do with the service, or how, or even why. So those determinations fall to us, and as a result, the whole thing seems to be convulsing and transforming, like, every six months.”