The creator of Snapchat is going public, and thanks to documents filed today, we’ve got a brief look at how the company’s hardware experiment is going.

Snap — as the company is now called — launched its futuristic camera sunglasses last year. At first Snap only sold its Spectacles inside elusive, grinning yellow vending machines. Now they’re a tad easier to find; in New York, five-hour lines for Spectacles have petered down to five minutes at the company’s popup store by Central Park.

In its S-1 filing today, Snap says Spectacles have “not generated significant revenue for us,” but in 2017 the company plans “to significantly broaden the distribution of Spectacles, which will increase our costs and overall financial risk.” That’s a big deal for Snap to say, as its hardware experiment has looked more like a hobby than a core pillar of its business.

Spectacles are mentioned 45 times in the S-1 filing, but they’re mostly cited as a risk factor to warn investors of unpredictable revenue, potential supply chain mishaps, and short-term costs [emphasis ours].

We have limited manufacturing experience for our only physical product, Spectacles, and we do not have any internal manufacturing capabilities. Instead, we rely on one contract manufacturer to build Spectacles … Any errors or defects in that third-party technology could result in errors in our products that could seriously harm our business. 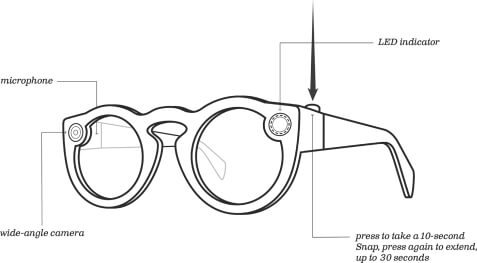 Once you pop Snap’s (very L.A.) sunglasses on, you can instantly shoot wide-angle, circular videos without pulling out your phone. Push the big round button above the left lens and you’re off. Inside the Snapchat app, you can view Spectacle videos full-screen and tilt your phone to view hidden parts of the video.

The sunglasses are reminiscent of Google’s failed smartglasses project (very S.F.), but Spectacles, for the most part, are less geeky and a lot less ambitious than Glass. In the short time I’ve spent with my pair (a couple days), they feel like a properly crafted consumer product. Glass, on the other hand, always felt like a half-finished prototype — too complicated for its own good.

Snap’s Spectacles arrived last fall with maximum PR and maximum caution. The company effectively pitched them as a limited edition accessory. Even today, Snap’s future hardware plans are vague; just because Snap is investing in Spectacles now doesn’t mean the app maker is committed to becoming a hardware company. Spectacle sales in 2017 may determine if Snap truly sees a future for itself in hardware.