Snap today announced a new feature for its flagship Snapchat app, one that allows users to manually delete messages for everyone in individual or group chats.

The “delete chat” feature will be landing on all platforms globally in the coming weeks, according to a statement issued by the company, and it will work even when a message has been saved by other members of the conversation.

As things stand, users can currently clear conversations from their own side, but if you send a message by mistake or send something that you regret, you can now elect to remove it for everyone in the conversation.

To delete a message or media assets, such as a sticker or voice note, press and hold the message and hit the delete option — other participants in the conversation will be notified of the deletion. It’s worth noting that this doesn’t circumvent good old-fashioned screenshots. 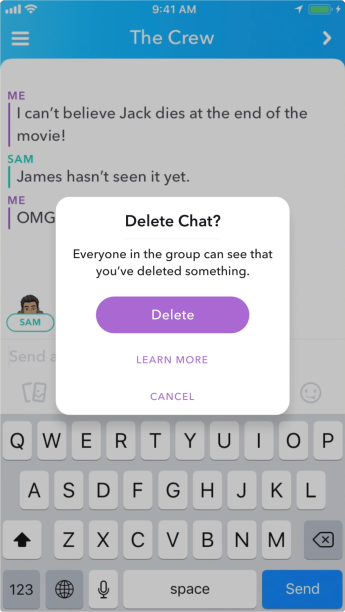 Snapchat rose to prominence for its ephemeral messaging service that allows users to send self-deleting photos to friends. But it has long since expanded into a feature-rich chat app encompassing text, voice, and video. This latest feature is built with the original spirit of Snapchat in mind, as gives users more control over the “permanence” of their messages.

This also follows something of a trend in the messaging realm, with WhatsApp recenlty introducing a message recall feature and Facebook itself in the process of developing a similar feature.

In other news, Snap also announced that version 2 of its camera-infused Spectacles wearable is now available to purchase  through Amazon in the U.S., U.K., and Canada, with other European markets “coming soon,” according to the company.