“Our intentions for Snatchly were pretty simple: a Pinterest that men would use,” Snatchly co-founder Neil Notts told VentureBeat via e-mail. (Notts isn’t his real name.)

Snatchly was launched on February 13 by two men who work for Los Angeles-based startups. The two have requested anonymity because they work full-time jobs at other companies and would rather not be associated with this project unless it becomes a smash. A screen grab of the site tells you why they might want to remain under-the-rader for now: 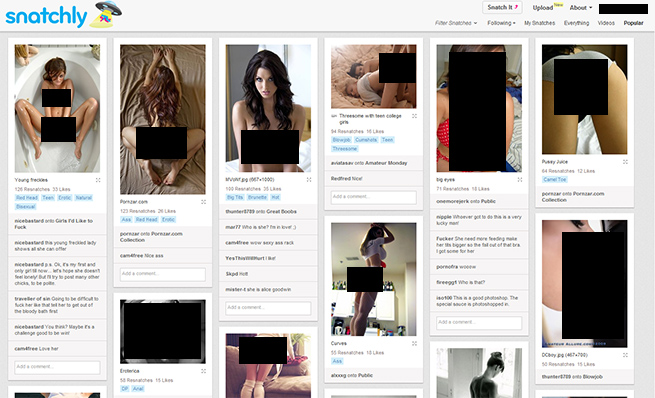 Notts and his partner’s idea seems to be catching on with online users. The site has so far registered more than 15,000 users and attracted more than 100,000 unique visitors. However, even with the users and eyeballs coming to the site, it will need to find a way to make money. Notts says he and his partner have some ideas, but want to make sure that the site remains “clean and unintrusive.”

“There are existing adult affiliate instruments that we could plug into similar to Pinterest via Skimlinks,” Notts said. “We’re also exploring the idea of sponsored snatches, boards, or even sections.”