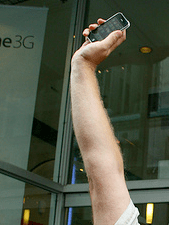 The iPhone took forever to get to Canada. Though the country shares the largest border with the United States, where iPhone-maker Apple resides, several other countries, including many in Europe, got the device before our neighbors to the north. Finally, with the launch of the iPhone 3G, Canada got the device, but many in Canada seemed unhappy (to put it lightly) with the offering from mobile carrier Rogers. Those differences seem to have been set aside however, since the country is buying the device in droves anyway.

Rogers announced that it sold 255,000 iPhones between its launch on July 11 and the end of September (the end of the quarter). This boosted the carrier’s net subscribers some 191,000, with some 33 percent of customers converting from a rival or signing up as a new wireless customer. When you take Canada’s smaller population into account, these sales numbers are similar to the iPhone’s success in America, according to the gadget blog Electronista.

When Rogers’ rivals announce their quarterly results over the next several days, their figures will show that they’ve been significantly hurt by Rogers’ exclusive deal with Apple on the iPhone, analysts at Desjardins Securities predict. Two big rivals, Bell and Telus, are both moving to HSPA networks in 2009. Right now, both use CDMA networks, which Verizon also uses in the United States and which make it difficult for a carrier to get the iPhone even if Apple did move beyond its exclusive contact with AT&T, since it’s a different type of network. The move to HSPA could allow Bell and Telus to sell the iPhone in Canada alongside Rogers, Electronista speculates.

After Rogers announced its initial absolutely ridiculous plans for potential iPhone buyers (400 megabytes of data a month for a $60 a month plan), a firestorm of criticism caused Rogers to go back and re-evaluate its offering. Rogers then decided 6 gigabytes was a better deal. In the U.S., AT&T customers get unlimited data with their plans (though they’re a bit more expensive).