Here’s what we know: There is a device Apple is set to unveil tomorrow with a retail price of $899.00. What no one seems entirely clear on with 12 hours to go before Apple’s event, is what exactly that device is.

Earlier this week, there were rumors that Apple would launch a MacBook in the $800 price range. While obviously, $899 is closer to $900, it still seems feasible that could have been the product. SKU numbers from Best Buy, leaked earlier, led the Apple blog MacRumors to to suggest the $899 product could be a MacBook, but the three digit numbers column is different on the $899 product than on all the more expensive products listed (which are almost for sure all MacBooks and MacBook Pros).

New reports are suggesting it could be a new Apple Cinema Display (the name of Apple’s monitors). As we noted earlier, these haven’t been updated in a long time. New displays are said to be in the works featuring DisplayPort connections and MagSafe power adapters (the magnetic adapter that MacBooks use), sources tell AppleInsider. It’s not clear though if the new displays will be ready to go tomorrow. So, the $899 device might not be a display either — and would Apple really only release one new display?

Now the following is just pure speculation, but bear with me a second.

It’s definitely worth noting that these new displays AppleInsider is hearing about are said to look like iMacs. Is it possible that the $899 unit could be a new kind of dock with a display built-in that resembles an iMac? I mentioned this earlier as a potential wild card because Apple has a patent for such a unit. That would be really interesting. 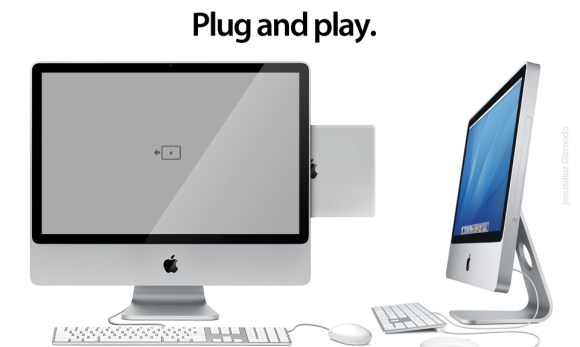 Would anyone pay $899 for a dock? Maybe not, but remember it would also be a 20 or 24-inch monitor. That’s pretty expensive for one of those too, but Apple monitors are very expensive. As someone who has both an iMac and a MacBook Pro, I would appreciate only needing one system, but with multiple ways to use it — sometimes I just prefer to sit down with a big monitor.

Gadget blog Gizmodo did a mock-up of what such a dock would look like several months ago based on the images in the patent filing.

This is probably just wishful thinking, but hey, there is a patent.

Could the $899 possibly be a Mac Tablet? It’s not out of the realm of possibility, but I would be very impressed if Apple was able to keep it under wraps this long with no real leaks. People are out there looking for anything they can get on it.

Instead, if I had to make a real guess, I would say that the $899 is probably a new low-end MacBook. That may seem boring compared to the iMac dock or the Mac Tablet, but a MacBook under $1,000 would excite a lot of people.

Update: MacRumors has newer information again pointing to the $899 product being a new LED Cinema Display, likely a 24-inch one. If that’s true, I have to again wonder if Apple is really setting the low-end MacBook price at $1,299? Seems awfully high.