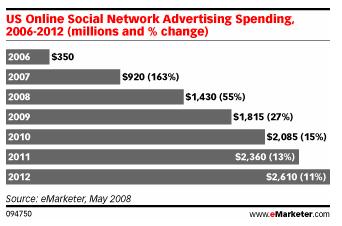 EMarketer feels it now has a better handle on social network ad spending for the more distant future, too. In 2011, it expects $2.4 billion to be spent versus its previous estimate of $2.7 billion.

Here are the reasons for the update to the previous report, which was published in December of 2007. A less rosy outlook on the economy will affect the amount of money spent by advertisers for years to come. Even the market leaders like Facebook and MySpace have yet to present compelling ad revenue models. Both companies, and others, have their own efforts to target advertising to users based on users’ demographic and personal information.

For those of us who think that social network application could partially prove their value through ads, the report now includes information on spending within social networking widgets and their more complex form, applications on Facebook and now other social networks. The fact that the forecast dropped in spite of this is not impressive. 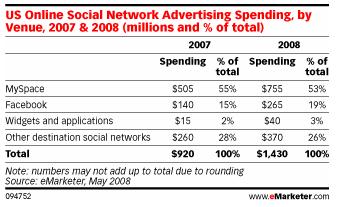 But advertisers, like eMarketer, are still figuring out how to measure these ads, and define how valuable they are. Anyone who has seen a branded virtual good within a social game on Facebook can get an idea of this — what does a branded good mean to a user? Let’s say a user buys a virtual Mountain Dew bottle within a game. Does this mean you can tie that purchase to the likelihood that the user will go out and buy Mountain Dew?

Of course, television and newspaper ads aren’t necessarily more verifiable than social network ads, but advertisers are used to spending money on them. The bulls of social networking, like widget-maker Slide’s chief executive, Max Levchin, already see themselves as more engaging than television. But in order to prove themselves to advertisers on a large scale, they’ll need to bring better metrics to the table than traditional media can offer, and that proven forms of online advertising like search ads can even better offer.

And for those of us who wonder about whether or not Facebook is breaking even — and should need to be taking out $100 million loans for infrastructure — eMarketer says that it expects Facebook to make $265 million in ad revenue this year, below the previous $305 million projection. Note: The cost to an advertiser of creating branded applications on Facebook isn’t counted here

Of course, anyone reading about the report needs to remember that it doesn’t address other ways social networks make money, like e-commerce, that social networks and their applications are looking at closely.