Socialmedian, the social news site created by Jobster co-founder Jason Goldberg, is opening the doors on its public test tonight.

The site has a compelling concept — that the best way to sort through the tremendous flood of news is with a little help from your friends — and it has been in private testing mode for four months. Socialmedian is built around news networks with topics like “tech news” and “venture capital,” which pull stories from relevant sources around the web. Users can submit articles to a network, create their own networks and also “clip” (recommend) the articles they find on Socialmedian.

The New York and Pune, India-based startup faces some big challenges; there’s a lot of competition, and not just from news-focused sites. After all, many news aggregators let you share news with your friends, and most social networks let you post interesting articles, too. With its “clip” feature, Socialmedian can also sound a bit like a Digg clone. And when I looked at Socialmedian back in May, nothing really grabbed me. Yes, there were some cool features and a clean interface, but it wasn’t enough to make me change my Google News and Techmeme-driven ways.

But here’s what’s encouraging: Socialmedian is getting better, and fast. Goldberg says Socialmedian’s development model is based on a lesson he learned from Jobster (which doesn’t seem to be taking off, although it’s still raising money) — that the CEO doesn’t know everything. Instead of taking the time to build a rich, fully functional site, Goldberg’s team created the skeleton in just a few weeks, and has been taking user suggestions to flesh out the bones.

“Those 350 different feature requests are what the site is today,” Goldberg says. 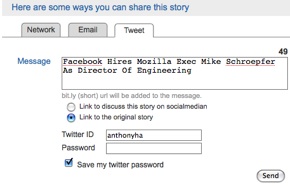 Of the features that have been added since May, the most important are the ability to follow individual “newsmakers” and see what they’re clipping and discussing, a “share” button that lets you easily post Socialmedian articles to Twitter and a “volume bar” that lets you adjust how many stories from a network show up in your news feed. (The volume bar wasn’t available when I checked this afternoon, but Goldberg says it should be up once the public test begins, which is right about now.) Even more interesting are some of the features that Goldberg says are coming soon, particularly integration with conversation and aggregation site FriendFeed. FriendFeed already lets people share and discuss news articles, so I’m curious to see if the two services will be as complementary as Goldberg says. Also on the way are invite-only news networks and a Socialmedian iPhone app.

Goldberg says he kept fundraising to a minimum, since he doesn’t need much cash. Socialmedian has raised less than $600,000, but that money comes from some high-profile backers including the Washington Post and angel investors like Reed Hundt, former chairman of the Federal Communications Commission, and Gordon Crovitz, former publisher of the Wall Street Journal.

In invite-only mode, the site has attracted more than 4,200 users who have created more than 1,000 news networks.