The shift toward digital books is helping small-fry authors and publishers to get in front of wider audiences than ever before. That trend is being reinforced today as Smashwords announces that it has a distribution agreement to get its books published on Sony’s new eBook portal.

Smashwords lets authors publish their books in online formats in a matter of days. Now those books can be downloaded to the Sony Reader, the company’s eBook reader gadget. Smashwords takes manuscripts from writers in Microsoft’s Word format and converts them into Adobe PDFs and eight other formats that can be read by eBook readers such as the Amazon Kindle and the Sony Reader. Now those eBooks can be uploaded into Sony’s portal, the eBook Store, where users can buy and download them. 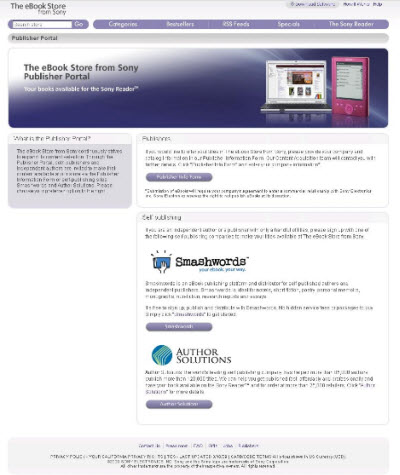 “This is one more example of the democratization of book publishing,” said Mark Coker, founder of Los Gatos, Calif.-based Smashwords.

Now it’s much easier for authors to hit lots of readers. Self-published authors can now visit the Sony Publisher Portal and click on Smashwords to sign up for a free publishing account. Then they can format a book in Smashwords’ style andchoose their distribution preferences, and their book will be made available for immediate sale at Smashwords.com. The book can show up a few days later on Sony’s eBook Store.

Besides Smashwords, Sony is also getting new eBooks from Author Solutions. Smashwords first launched its eBook publishing and distribution platform 16 months ago. Now it has more than 3,000 books available. While that’s a small number, Coker said he is working to rapidly increase the book count. In January, Smashwords announced a distribution agreement with Lexcyle, to allow Smashwords books to be read by users of Stanza, an iPhone eBook-reading app with two million users. And Smashwords has an agreement with Barnes & Noble, which now distributes Smashwords books on BarnesandNoble.com, Fictionwise and on the iPhone eReader app.

Smashwords was founded in 2008. The company has 2.5 full-time employees and is self-funded.