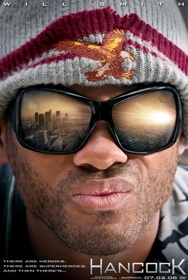 Apple made a big splash at MacWorld this year when it announced that all of the major Hollywood studios had signed up to release movies through its iTunes store. However, many of the studios refused to let Apple rent the movies the same day they were released on DVD.

This changed a few months later as both Apple and the studios realized that people wanted to rent new release when they were actually well, new.

Now Sony is taking the next step.

As you may know, Sony owns a movie studio. That studio is releasing a big budget Will Smith superhero movie this Summer called Hancock. When Hancock is available to buy in a few months, guess where you will first be able to buy it? Not iTunes, not even DVD, but Sony’s own digital distribution service to be launched this Fall, Sony chief executive Howard Stringer told an audience in Tokyo this morning.

This is part of Sony’s plan to make its television and video game divisions profitable once again. Its new Bravia line of televisions will be able to receive downloads via the Internet without hooking up to cable or satellite. The same will likely be true for its Playstation 3 video game console, which will roll out its digital movie download service this summer.

If it can get access to Sony movies before they are released anywhere else, that could certainly help the company move more units — as well as give it a foothold in an arena it’s already late to: Digital distribution in the living room.

Both Microsoft and Apple have a big head start on Sony in that realm with their Xbox 360 and Apple TV devices respectively. Neither of those companies owns a movie studio however.

The move is somewhat interesting though by Sony. After all, it is the key proponent of the Blu-ray high definition disc format, which only recently beat its HD DVD rival (which Microsoft had backed). Blu-ray is also a key component of the PS3, and Sony appears to be undercutting it if it starts sending movies digitally before they come to that format.

This is a big step towards legitimizing digital distribution as the wave of the future for video. The Hollywood studios are still terrified of the digital piracy that has crippled the music industry, but the shift is inevitable. It’s good to see Sony taking the lead in innovation and forward thinking once again.