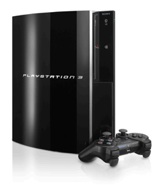 Sony created the next generation video disc format Blu-ray, but that isn’t stopping them from throwing their hat in to the digital distribution ring as well. Today at its E3 press conference, the company announced that movies and television shows will now be available for download via its Playstation Network for the Playstation 3 and PSP video game systems.

Movie studios 20th Century Fox, MGM, Paramount, Lionsgate and of course, Sony Pictures, have already signed on to both rent and sell their movies over this network. Disney is signed on as well, but only for rentals. Without reading too much into this, it’s interesting since Apple chief executive Steve Jobs is Disney’s largest shareholder and sits on its board of directors. Apple of course makes its own digital distribution box, the Apple TV — which now has to be seen as a competitor.

The more direct competitor is Microsoft with its Xbox 360 system. Both the 360 and the PS3 now offer next generation gaming alongside robust digital media offerings. Sony has an advantage in that every PS3 has a Blu-ray player built in to it, but today’s announcement seems to acknowledge that distribution over the Internet will eventually take over (a trend that makes Sony President Ryoji Chubachi’s earlier claim that Blu-ray will have 50 percent market share by the end of the year seem both unlikely and irrelevant).

This fall, Microsoft will gain a huge advantage when Netflix “Watch Instantly” content comes to its box. This will enable users of its Xbox Live service who are also Netflix subscribers to see over 10,000 movies on demand.

Initially, the Playstation Network will offer only 300 full-length movies and 1,200 TV episodes. More will be added over time. 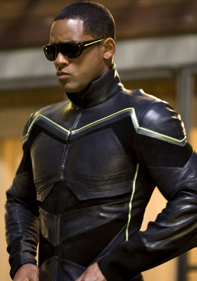 Much of the content on Sony’s network will be available in both standard and high definition with prices ranging from $2.99 to $5.99 for movie rentals and $9.99 to $14.99 for movie purchases. Television shows will cost $1.99 to buy. All of these prices are pretty much in line with Apple’s iTunes store. However, while downloaded movies from iTunes can be kept for 30 days without playback, movies under Sony’s system will only last 14 days. Both services’ content expire 24-hours after playback has actually begun.

Much more interesting is the previously revealed plans that Sony would release its own films over its network before their release on DVD. The movie Hancock (pictured: right), which is currently in theaters, will be the first of these films this fall.

Also interesting is Sony’s use of Marlin DRM technology, PaidContent reports. This is an open standard content protector that will allow purchases made on the PS3 to be transfered to the PSP portable system and vice versa. This is another advantage Sony will have over Microsoft, akin to buying a movie on your Apple TV and transferring it to your iPod via Apple’s system.