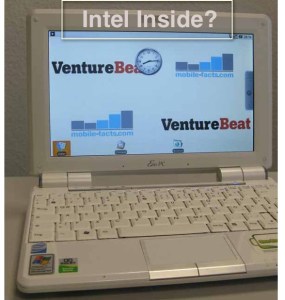 As netbook sales continue to pick up in a struggling world economy, Intel, which makes the processors found in many of those netbooks, is mulling over how best to profit from that market.

Intel is now preparing for the mass production of Google Android-based netbooks, a reliable source tells us, though for now we have few other details.

Such an effort could yield Android netbooks as early as this year, but 2010 remains a more likely scenario.

We’ve previously detailed and showed off what a netbook running Android can do. While the platform is just starting to get traction as a mobile operating system, its core is based on Linux, which of course powers many different computerized devices. This means it’s possible for Android to also run on many types of devices, something that Fujitsu is looking into already. But Android running on personal computers might be its most interesting usage. And that’s what netbooks are: Small, inexpensive personal computers.

Intel recently reported poor results for its fourth quarter earnings, as demand for computers in general declined. When chief executive Paul Otellini talked with analysts about the netbook phenomenon during the company’s conference call, he indicated that netbook sales were not eating into notebook sales on a large scale — rather, they were incremental — and a source of excitement in the market. Regardless of the way you look at it, netbook sales are growing, and Intel is probably more than willing to attach itself to any area it sees with growth potential.

Android running on netbooks represents what could be a very viable alternative for those who don’t want netbooks that run an operating system like Windows Vista. Linux has already proven to be a popular OS choice among netbook buyers, and a lot of those users may be more than willing to use Android and its built-in functionality such as an application store.

Application stores, centralized repositories of third-party apps, are a boon to developers and consumers alike. It’s the reason I expect Apple to also spread its App Store to some of its other devices eventually. But while Apple still refuses to build a netbook, Android appears to be ready to embrace the market. And the key players, like Intel, appear ready to embrace it, too