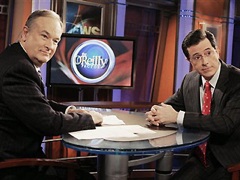 I’m not sure if the two major party U.S. Presidential candidates, Barack Obama and John McCain, are using the RSS feed reader Google Reader to get their news (they’re probably busy with other stuff), but apparently their aides are. Google is highlighting the two campaigns in its new Power Readers in Politics site.

This means one thing: You are about to enter a spin zone.

The new site uses Google Reader’s “Shared items” functionality to spread information. Any item that is read in the feed reader can be shared, meaning that others can see the story and any comments you make on it.

Hopefully to balance out what will undoubtedly be pro-Obama and pro-McCain stories from their respective sides, Google has also included the shared items from some leading political journalists, including Mike Allen of Politico, Chuck DeFeo of Townhall, John Dickerson of Slate, Mark Halprin of Time, Arianna Huffington of Huffington Post, Ruth Marcus of The Washington Post, Jon Meacham of Newsweek and Patrick Ruffini of The Next Right.

One thing that strikes me immediately about this site is that it makes the comment feature of Google Reader much more interesting. For instance, If I see that the Obama campaign is sharing a story about a phone call a New Hampshire man receives, I would have to read the whole story to figure out why they were sharing it. With comments, though, I can see quickly that it’s a story about Obama calling up his 2 millionth donor, and I can decide if I want to read from there.

The other thing that strikes me is that Google is continuing to make the sharing of feed items a more social feature. Last week it finally made it so you could control your friend lists (those who you share items with). Now we have a “power readers” site. You’ll notice it says “in politics,” I have a feeling we’ll be seeing more of these sites for other topics of interest.

It would certainly be interesting for me to see a Power Readers in Tech area for example. But I’d also like a Power Readers in Sports. Google Reader is a tool to streamline information gathering, but sometimes it can be hard to find good sources of that information to begin with. That’s especially true for new users. Areas like this that showcase items that thought leaders in certain fields read is very useful.

Then, who knows, eventually Google may finally make a “best of” Google Reader page to highlight the most shared items system-wide alongside certain celebrity shares.

[Neither Bill O’Reilly or Steven Colbert (pictured) are (yet) featured in this new area. Makes sense since O’Reilly runs “The No-Spin Zone.” Photo via Fox News.]