Spot Runner, which lets advertisers place to local TV stations via an online service, has laid off 50 of its employees as it realigns its strategy.

The Los Angeles company says the layoffs amount to 10 percent of its employees and it plans to hire another 40, said Rosabel Tao, a spokeswoman. The news of such drastic changes is surprising, since the company has plenty of cash in the bank from a $51 million round announced in May.

“People have jumped to the conclusion that it’s because of the economy,” Tao said. “That’s not true.”

Earlier this year, Spot Runner started to reorganize itself along three business lines.  The company started by selling TV ads for small businesses. It helped automate the media-buying process and created relationships with a variety of media companies.

The business works like this. A local business owner visits the Spot Runner site, selects a business category and chooses from a lot of generic, pre-taped video ads. Each comes with voice-over text that can be customized. Then it tells Spot Runner how much it wants to spend on TV air time and which media markets it wants the ads to run in. Earlier this year, the company bought GlobeShooter and gained access to 2,000 filmmakers who can create pre-fabricated commercials. Ad customers can customize those ads for as little as $500.

Now Spot Runner has added online search, radio and other local sales channels to its portfolio. It hired former Interpublic CEO Mark Rosenthal as head of media platforms and vice chairman. It also added Joanne Bradford, former head of MSN, as executive vice president to oversee national marketing services. Kurt Weinheimer runs local marketing services. With these new businesses, the company has to let go of some people where it has too many workers, such as local TV, and hire people in areas such as national account management, Tao said. Rosenthal’s new businesses haven’t launched yet. 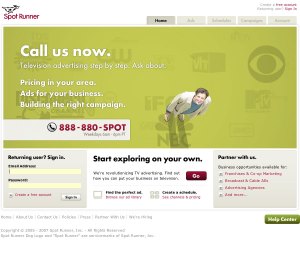 The startup just got some competition from search and online ad giant Google, which recently announced the general availability of its TV ad program. It also competes with Jivox.