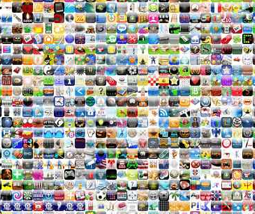 300 million: It’s roughly the population of the United States, and now it’s also the number of applications that have been downloaded from Apple’s App Store, according to ads that ran in the print version of the New York Times and Wall Street Journal today.

For something that only launched on July 11 of this year, it’s a pretty staggering number. And Apple can thank the development community that has created over 10,000 apps for the platform. How impressive is that number? Compare it to Google’s Android platform, which launched its first phone and marketplace in October. After about a month and a half, that platform has only 462 applications, according to app analytics firm Medialets.

Sure, it’s still very early. But at this pace there’s no way Android is going to have 10,000 apps in its first five months. Apple’s iPhone apps hit 60 million downloads in the App Store’s first month. For the Android Marketplace to have accomplished the same feat, every one of its 462 apps would have to have been downloaded roughly 130,000 times. In other words, it probably wasn’t even close.

Android is simply not going to be able to keep up unless developers start picking up the pace. That should happen as more phones that run Android become available, but as I said, with only 462 apps right now, hitting 10,000 anytime soon will be difficult.

And don’t think that other developers out there deciding which platform to build on don’t realize that.

Update: As a few commenters have noted (and I should have included originally), it’s definitely worth noting that currently all Android apps in the Marketplace are free. Paid apps should be coming early next year, and when they do, more developers will likely look at the Android platform as a viable way to make some money — and will build apps because of it.

Still, I expect the other Android-based phones that will launch next year to have a bigger impact in deciding if developers will ultimately show as much love to Android as they have to the iPhone.