Visual storytelling app Storehouse is bucking the trend when it comes to tech companies these days. Instead of promoting social behavior, the startup has stripped its app of such functionality — no followers, likes, hashtags, republishing, and timelines are being shown. Storehouse 2.0 is now a private space for publishing photos.

Previously, Storehouse empowered you to create beautiful stories leveraging content pulled from photos and videos on Dropbox, Flickr, Instagram, and your iPad’s camera roll. The idea was for people to create these magazine-like publications and then share them with their friends, family, or the public. But somewhere between launch and now something has changed. 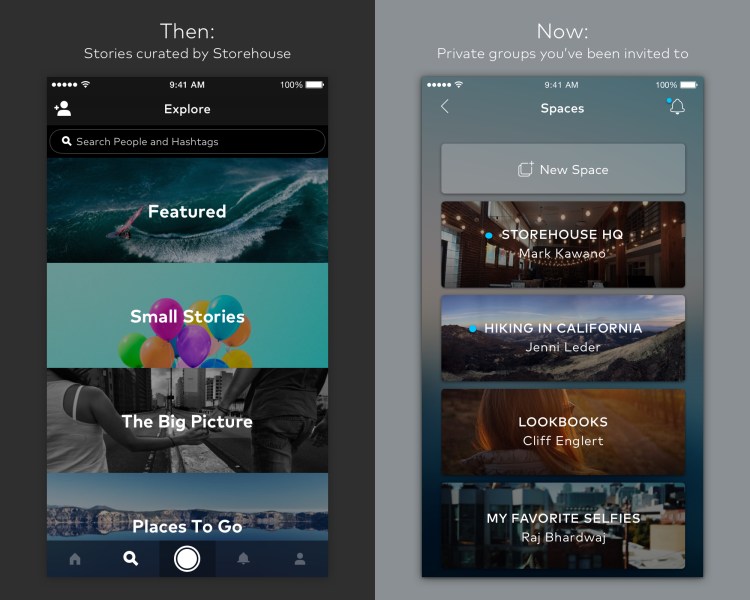 Above: Before and after screenshots of the explore screen in Storehouse.

In this new product redesign, all creation tools are now dedicated to private sharing among friends. Storehouse said that with this update, its interface and layout tools are now thrust into the spotlight, while it also introduces users to new capabilities such as a “shake-and-edit” way of sorting photos into a specific layout design.

The company has also launched a feature called Spaces, which lets specific groups of individuals contribute to projects.

“People are craving authenticity and real connections more so now than ever before,” said Storehouse chief executive Mark Kawano. “Instead of communicating one to many, people want a real connection — especially around vacations, kids, creative work, and the other parts of life that fill our camera rolls.” 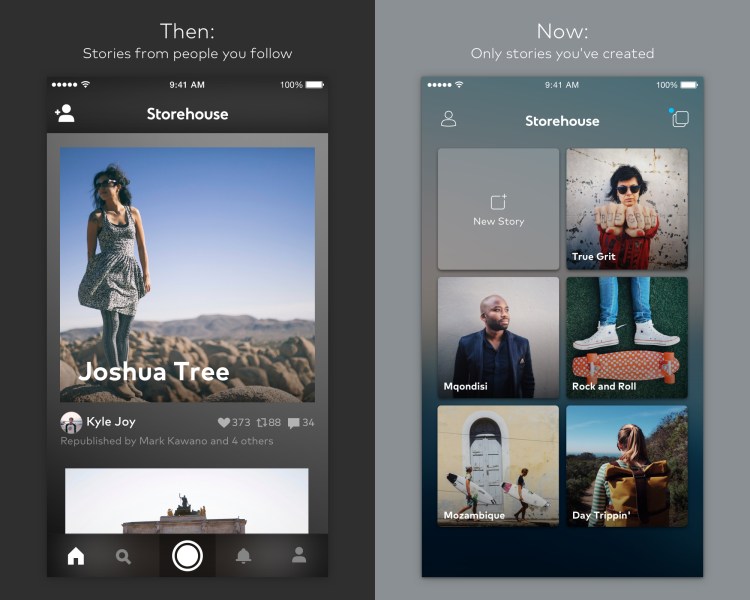 Above: Before and after screenshots of the home screen in Storehouse.

So the difference is that now it’s akin to Cluster, but with more emphasis on storytelling and with a Flipboard-esque aesthetic and layout.

The move to a private service has been defended by Kawano, who said, “While we really enjoyed scrolling through the Storehouse feed to discover different people and parts of the world through stories, we started to learn that this sharing model had some major drawbacks.”

He added, “By forcing everybody to publish all of their stories to all of their followers, whether a public or private account, we saw that many people were limiting what types of stories they created. For others, the stories that appeared in their feed intimidated them from posting anything at all.”

With 1 million people, could it be that people are afraid of not being able to create compelling storytelling content as beautifully as the next person? This may be partially the reason for the switch, as the company wants to make sure that sharing is benefiting the receivers and the creators equally. What Kawano wants to avoid are people sharing their memories with complete strangers — those who may be following them because of the good pieces they’ve previously put together. By stripping away that awkwardness, true storytelling can occur for those people that actually care.