Strutta, a site where users compete to provide the best-liked videos in a wide range of categories, is launching its public test today.

At first glance, Strutta might seem a lot like dominant video site YouTube, but it’s focused much more on competition. The site is organized around a bunch of different contests — best Guitar Hero player, best pet tricks, best joke telling and so on. Users can either upload their videos directly to Strutta or upload to sites like YouTube then embed the video in Strutta. In either case, you can’t just point to videos you think are cool, you have to actually film it or participate in the action yourself. Then Strutta works like a tournament, pitting different videos against each other in smaller rounds until, at the end of the year, someone is crowned the best in each category.

“We’re trying to draw as many analogs as we can with offline contests,” chief executive Danny Robinson says. 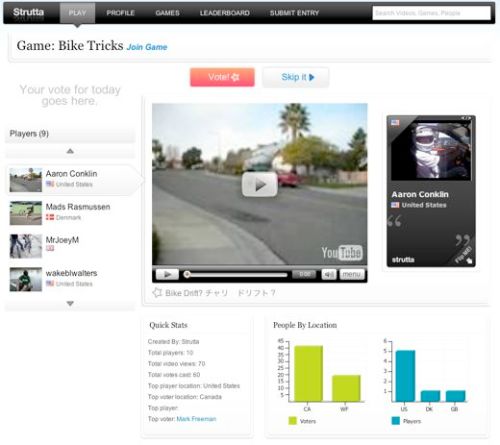 As with YouTube, Robinson predicts the vast majority of Strutta users will come to watch and vote on videos, rather than provide content themselves. Some may visit Strutta because the site can help them find the best video in a certain field (and by “field” I mean “random category of Internet video”). YouTube has mechanisms to help with that too, such as its rating system and listing the number of views, but Strutta makes its goal of finding the best content explicit. In a way, it can function as a Digg for online video.

Like Digg, the people who vote on videos are competing for recognition themselves. In fact, on Strutta they’re called “players”, not visitors or judges. There are a number of ways they can try to improve their standing on the site, most notably by voting on videos that turn out to be winners. Robinson’s goal is to make visitors feel invested not just in individual contests, but also in trying to become a top player.

Strutta won’t reveal its business plan until later this year. With video sites, that’s often a big challenge — even YouTube is struggling to make money (our coverage). But Robinson argues that there’s a lot of potential here, pointing specifically to the fact that half the money in traditional advertising is spent in sports. (Strutta doesn’t focus on sports, but it’s trying to bring that same competitive spirit to things like Guitar Hero.) And  the company’s revenue won’t be limited to ads, he says.

The Vancouver, Canada startup has raised $1.2 million from venture firm GrowthWorks, angel investors and grants from the Canadian government.