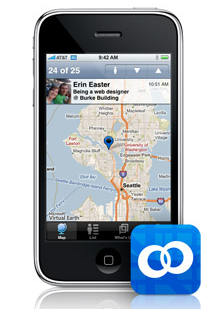 It looks as if Loopt may be looking for an out — or more likely, an insane new round of funding. The location-based social network for mobile devices has supposedly hired the investment band Allen & Co. to find a potential sale or investment partner, TechCrunch is reporting.

But what’s crazy is the apparent valuation Allen & Co. is putting Loopt at: Over $500 million. Now, I like Loopt as much as the next guy, and am bullish on the eventual success of location-based services, but a half billion dollars, in this market, for a network that is far from established? Come on.

So with those kind of numbers being thrown around, you can throw a sale out the window. But with over $13 million is funding already raised from the likes of Sequoia Capital and New Enterprise Associates, does Loopt really need the massive amount of new money that such a valuation would bring in?

Maybe. After all, we all know Facebook and MySpace are going to get into the location-based networking arena eventually with their networks that are much more vast and deeply rooted. If they’re able to conquer location quick enough, it could mean trouble for services like Loopt and Pelago’s Whrrl.

In a separate article, TechCrunch’s Mike Arrington seems very bullish about Loopt’s prospects seeing as it has risen back into the top 20 apps in the App Store. But this surge can be attributed to one thing: Loopt being featured in an Apple commercial. It cannot be overstated how huge that is.

We’ve previously written about the power of apps being featured in Apple retail stores, but commercial time is probably even better. After all, only a few were selected for the latest commercials including Shazam and UrbanSpoon — both of which are now, you guessed it, top applications once again in the App Store. (Both, like Loopt, were previously popular apps before falling a bit as new ones rose to power.)

Don’t get me wrong, Loopt definitely has many elements of what it takes to make it a successful network, but that doesn’t ensure that it will be. It all comes down to users using it, and despite new features like Loopt Mix, most of the people I know simply aren’t. Instead they’re still using networks like Facebook and Twitter, neither of which have location (and Twitter needs some mobile work in general), but for now that doesn’t seem to matter.

Loopt founder Sam Altman didn’t have a comment when we asked him about the rumored Allen & Co. help. We’ve previously covered Allen & Co.’s secretive dealings here. They were also the firm brought on to help Digg in a sale that never happened. That company instead opted to take a new round of funding recently.