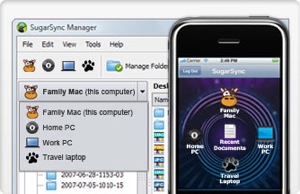 SugarSync, the service from startup Sharpcast that allows users to synchronize files across multiple computers and mobile devices, just became even more useful with the release of an iPhone application.

There are a lot of other sync services out there, including Syncplicity and Dropbox, but I was really impressed by the demo I saw when SugarSync launched in March — once you set up SugarSync, it requires virtually no thought or effort to keep multiple files and folders synchronized. One of SugarSync’s other  advantages is the fact that it’s compatible with smartphones and televisions, which is pretty rare among sync startups, and is especially useful for viewing photos or other media. SugarSync is already compatible with BlackBerry and Windows Mobile devices; by introducing an iPhone application, the service now works with the most multimedia-friendly mobile device all.

The iPhone app is obviously a smart addition, but it’s hard to know exactly how big a deal it is. The writers at GigaOM, for example, appear to disagree among themselves. Om Malik says it’s a a big advantage, while Stacey Higginbotham argues that business owners aren’t interested in mobile sync yet. Still, I think this could help make SugarSync more useful for consumers. I, for example, was impressed by the service, but stopped using it after a few weeks since I only have one computer. But now that I can use SugarSync to access photos and documents on my iPhone, I may just change my mind.

The other open question is how San Mateo, Calif.-based Sharpcast plans to stay competitive with bigger companies, not just startups. Apple’s troubled MobileMe service offers some syncing capabilities, and apparently the mobile version of Microsoft’s Live Mesh also works on the iPhone.