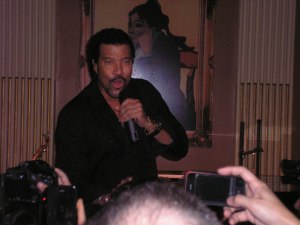 Heating up the battle among social networks, MySpace said today it will take on Facebook and others as it prepares to launch its system where users can pay real cash for virtual good.

Amit Kapur, chief operating officer at MySpace, revealed the company’s plans at the Web 2.0 Summit in San Francisco. Apparently he wasn’t overly tired from the MySpace party the night before, which featured singer Lionel Ritchie performing live. (I’d love to be able to sell my Lionel picture for real cash, too.)

MySpace developers will be able to use the new payment and virtual gift systems within applications that run on top of MySpace. Facebook has its own virtual gift system, but it hasn’t yet opened that up to developers. Earlier this week, Eric Eldon wrote about how the company shifted off the dollar to a currency that can work across the world.

Facebook and MySpace are in a land grab to get the most users. But you can bet that if one of them nails  the right payment system, they can start monetizing that big base of users much more easily. With proper payment systems, they can create a commerce system that is Amazon-like or eBay-like.

Virtual gift systems will produce new revenues at a time when ad-based revenue comes under pressure because of the recession. There are parallels for this in mobile phones. Apple has proven that users will engage in millions of transactions downloading apps for the iPhone. And in the first quarter of 2009, Google will launch an Android Market where users can pay to download apps for their cell phones with Google’s Android software.

Doing this the right way will matter. If you charge for an app, usage goes way down. But if you can find a way to do micro-transactions, where each virtual good costs, say, 10 cents, then you’re much more likely to generate revenues across the entire user base.