Influencer marketing firm TapInfluence is today announcing a new platform that lets brands connect with social influencers in a kind of eBay-style marketplace.

Called TapFusion, this completely automated platform allows a brand to post a new campaign — along with requirements, images, time frame, specs for influencers, and other factors — that sifts the approximately 25,000 registered social media influencers for the most appropriate purveyors.

The registrants are non-exclusive to TapInfluence, and can participate in campaigns for other influencer marketing agencies.

In influencer marketing, a brand typically connects with people who have large numbers of followers on social networks. The idea is for the influencers to tell their followers in a video or a posted comment about how much they love a new kind of toothpaste or a new smartphone, and then link to the product maker’s site.

Once a campaign is posted on TapInfluence, the new platform shows all the influencers who meet the qualifications, defined by a minimum number of followers or a special interest. Each influencer’s profile contains their special qualifications, as well as their standard rate.

The brand selects the influencers it wants, sets conditions like whether it needs to see a draft of the post or an edit of the video before it goes live, and the campaign begins. The platform then automatically tracks and reports on the campaign’s success (or lack thereof).

TapInfluence reports that their average influencer reaches about 50,000 people, and some can reach millions. By the end of October, it expects to have 400 campaigns running. About 200 brands and agencies currently use the platform, and TapInfluence claims an 85 percent acceptance rate by influencers of brand proposals. 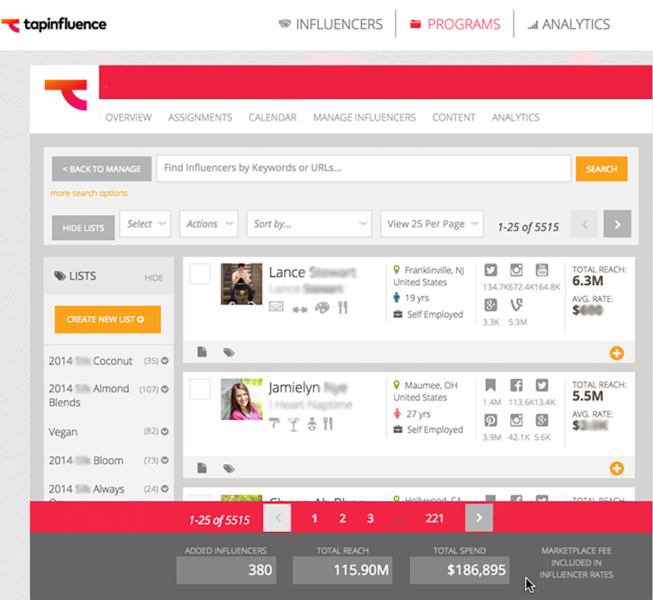 Above: A screen in the new TapInfluence platform

One campaign, for an unnamed Fortune 500 “consumer storage company,” reportedly used 39 influencers, reached 50 million people, generated nearly 300,000 shares, comments, and likes, and moved about $225,000 of the product before the item sold out. TapInfluence estimates it would take about $1.2 million to generate the same result using banner ads. That campaign cost $21,000.

The new end-to-end automated platform replaces the various online tools the company had been using since its founding in 2009, during which period it had also provided services that cofounder and chief product officer Rustin Banks told me “still held the customer’s hand.”

Banks pointed to agencies and brands “doing it themselves” as TapInfluence’s biggest competitors, except that now some of those agencies and brands are using this platform. He said one frequently encountered competitor is Izea, which blends agency services with automation. But the biggest differentiator now, he said, is that TapInfluence’s new platform is an end-to-to-end solution.

In many ways, the platform is not unlike others out there, such as those provided by NeoReach or Themidgame. But it scales this kind of matchmaking to its next step, completely removing TapInfluence from providing any go-between services. Brands and social influencers can buy and sell “influence” as easily as they can buy and sell used books on eBay.

For the Boulder, Colorado-based TapInfluence, the business model is volume-based. It makes money primarily by charging a monthly subscription fee for brands and agencies to use the platform, which starts at $3,500 and increases with the number of influencers and campaigns.

It also takes a small cut of the influencer’s fee to cover management of the brand’s payments, issuing of contractor tax forms for the influencers, and other tasks. CEO Promise Phelon told me TapInfluence pays the influencer immediately after the campaign, often before the brand has paid.

If the 25,000 registered influencers do not offer what a brand is looking for, TapInfluence will also tap into influencer directories that offer tens of thousands more. And, in a move that could point to influencer marketing’s next phase, TapInfluence can even tap into hundreds of millions of social profiles, where anyone with an interest or a following on a social network could be approached.

“It could be someone with ten friends,” Phelon told me. “We’re growing influencers.”

With a fully automated platform and the entire social networking world as a pool for possible participants, it’s not hard to imagine that influencer marketing in the next few years could become a kind of targeted mass marketing.

In other words, if your profile says you love Wookiees, you might be approached automatically through this or another such platform to post a comment or a video about your enthusiasm for a new Star Wars sequel.

As brands come to understand that, in a fully interactive world, ads are something many simply choose to ignore, this kind of trusted endorsement will not only grow in value, but could become commonplace.

This raises the question of whether the key value on which influencer marketing is built — trust between friends, or between a star and followers — is an infinite resource.

Or whether, when your friends and your idols pitch their purported enthusiasms, you will feel the need to ask:

Is this you … or a campaign?