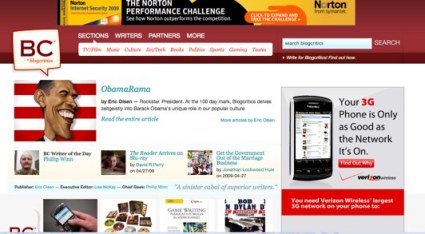 BlogCritics, a community of some 3,300 writers of personal blogs, has had a major redesign to boost traffic.

The new site goes live at 1 am Tuesday with more images and improved navigation. Other aspects of the redesign include a different logo, more color, and features such as the “ObamaNation,” which monitors the connection between pop culture and the President. The site also has its professional side, with 15 editors combing through the posts to display the most interesting pieces more prominently on the site. Readers can now follow their favorite authors. They can see everything a writer has written both on and off the site.

The idea behind Blogcritics, founded in 2002, is interesting. It gives writers who would only garner tiny audiences on their own access to a larger audience. The community has published more than 84,000 posts, with hundreds published each week on topics including news, opinions, and product reviews across entertainment, technology, culture and politics.

The site was bought by Technorati Media in August of last year. Technorati also bought AdEngage, to create a blog ad network. Richard Jalichandra, chief executive of Technorati, says BlogCritics is one answer to the discussion about the decline of classic journalism along with the meteoric rise of citizen journalism.